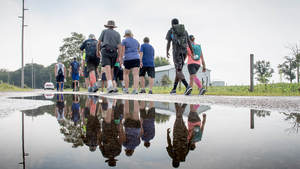 Do you remember being a kid in school – a young kid, fifth or sixth grade – and those times when the teacher would momentarily leave the room for whatever reason, and would warn you that your class had better remain quiet and just focus on whatever busywork was on your desks, and while she was gone someone would whisper something, a question or a teasing comment, and someone would whisper something in response, and the shhsh-ing would start? One kid would shh one kid, and some other kid would shh them both. And then usually the first kid who’d done the whispering to begin with would wind everyone up by shh-ing them all back. It would build until the good kid, the really smart and good kid who was seated at the back of the class because the teacher knew she didn’t need to keep an eye on this one, that kid would SHHHH! the whole room in exasperation and to the delight of the kids seated at the front of the room who the teacher always needed to keep her eye on. And those kids would SHHHHHH! back so that the room was filled with a cacophony of ten-year-olds telling each other to be quiet.

I’m listening to that right now.

It’s two-thirty in the morning and a storm is rolling in outside. I have the window open so that I can hear the wind in front of the storm, and the spits of rain it carries, rushing through the leaves in waves, hushing them in ever louder shhsh-es like naughty kids delighting in pretending to be good.

We’re staying in a retreat center about sixty miles from South Bend, perhaps a little more. If I wrote early on how much preparing for this pilgrimage felt like preparing for freshman year, moving our team into these dormitories for the next few nights only reinforces the feeling.

Thunder rolls, doubly hidden above the clouds and in the dark, from somewhere very far away – the deep, gruff grumble of a giant whose voice would split the air if angered, but which in this instance sounds more like distant suspicion.

Tom Gustafson (’71) is not that giant, but he does grumble a fair bit. He’s outspoken and abrasive. I’ve said as much to him directly as we have sat together at dinner but it’s nothing he doesn’t already know himself and, frankly, I’ve come to love him for it. That abrasiveness comes from a deep passion and concern about the state of the world around him – particularly the environment – and his dedication to be a part of what solutions we might find.

He knows he’s a bit of a codger – in truth, I think he rather relishes the role – but we caught a glimpse of a different man this evening as his daughter, Rachel, stands beside him in the back of the chapel during the first Mass where the core pilgrims have been joined by the newbies. Just as the service begins, she puts her arm around him and squeezes him close to her and he does the same, and I, a father of daughters, can’t help but smile and feel my heart swell as I watch a father and a daughter and their bond.

My father-in-law and his daughter are currently together on a pilgrimage of their own, driving across the country to get her, my wife, to our new home in Seattle. He is a retired rocket scientist (No, seriously, he is. “What are you, a rocket scientist?” “Yes.”) and they were eager to take a southernly swoop to the drive to ensure they were in the path of totality for yesterday’s eclipse.

Micki Kidder is the Associate Vice President & Executive Director of Development at the University and part of the core team. As we walked, we talked of Christmas traditions, and of how a few years ago her father, Clay Ewing, another pilgrim joining us for last five days, had been hospitalized just as the family was returning home for the holiday. He was released from the hospital on Christmas Eve and no one had the energy or inclination to cook when there were other things to worry about, and so a new Christmas tradition of ordering pizza and just relaxing together was born.

The story bounces around in between us comparing notes on how we, she and I and our respective families, build the holiday as parents of our own kids. What traditions we instill. What beliefs we engender. Her kids believe in Santa Claus but not the Tooth Fairy or the Easter Bunny, she tells me, and I say that we choose our beliefs, and we keep walking – a father of daughters and the daughter of a father.

The day is filled with these echoes of the stories we tell and the stories we believe – not necessarily the same thing – and of the love shared between and among generations.

I think of Tim Huddle (’76) – a man of science, a newly-retired surgeon, a film buff, a kind and softly spoken soul, a gentleman and a gentle man with a wandering curiosity for all things – who prays for his brother as he battles pancreatic cancer. I think of Bill, whose brother is also fighting cancer, though in his case of the lungs. For some reason, my head connects them to the eclipse and Christmas and a daughter putting her arm around her father in a church pew.

I think of my mother wisely addressing my Catholic school concern that I was not praying enough by reassuring me that wonder is a form of prayer. “Every time you see something that makes you stop and go ‘Wow,’” she said, “God hears that as a prayer.”

I’ve lived my life with that idea in my heart ever since.