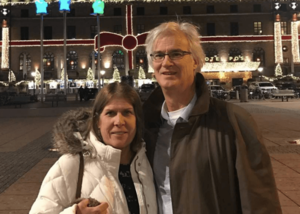 Bill Borders (ND ’76) strikes me as one of those people who, for some reason, are usually referred to using both names. You know: as in, “Bill Borders stopped by today.” Never, “Bill stopped by,” or “Borders was here.” Two names. Both barrels. He seems like he has that kind of impact.

I could be wrong, of course. I’ve only spoken to him once, so far, and only by phone. I’ve never met him. For all I know, he could be as tall as Danny DeVito and as handsome as Shrek. But he speaks with a deep southern Indiana drawl that’s as solid as oak, and he’s a master of that midwestern habit of understatement that lets you know everything is under control.

I ask him why he’s walking the Trail.

“Well, my son works in development there and he mentioned it to me and I thought, ‘Well, hell. That sounds interesting.”

I’m going to like Bill Borders, I can tell.

For a start, he swears. At least a little.

I swear. At least a lot. Perhaps excessively. Which frankly has me a little worried as I try to imagine walking 320 miles across Indiana for two weeks at the end of August (Borders is predicting “90/90 days” – that’s 90 degree heat, 90 percent humidity – and he’s calling the idea “interesting”). We’ll presumably be in the company of very devout and pious individuals. When I picture a “pilgrimage” I don’t picture a raucous, bacchanalian event. I picture piety, and I hope my tongue doesn’t get me into trouble.

Bill Borders also seems to be the sort who doesn’t ponder a bad decision too long before jumping in, which again is something to which I can relate. He signed up for the 5-day leg of the pilgrimage almost immediately and then let the organizers know “I can do the whole thing if you need someone.” They talked a bit about the physical expectations of the core team of pilgrims – we’ll be covering about 35 miles a day for eight days under our own power before being joined by those walking the 5-day, 3-day, or final 1-day legs of the journey (all of which are significantly shorter walks). Only after he hung up the phone did he wonder, “What the hell did I just volunteer for?” (He swears. Thank God, he swears.)

Oh, by the way, the man has managed type-1 diabetes for thirty years.

“You’re doing this with diabetes?” I ask.

“Yeah. They’re a little worried about that, but I’ll be good,” he says.

“You’re making this really hard for me to feel any sense of personal accomplishment, you know,” I say. Then we both remember that another one of the core pilgrims is an 80-year-old Holy Cross brother who has twice cycled across the country and suddenly neither of us feel very special anymore.

“But it was a neat place to go to school,” he then says, getting back to the reasons for signing up for this, and his voice is immediately softened by a nostalgia I know well. A nostalgia which breaks through that habitual understatement.

“We’ve been incredibly blessed,” he says, and I notice he speaks as a family rather than an individual. Bill and Mary Jo (Cinnamond, SMC ’76) Borders have been married 33 years and have two sons. The recession brought their family’s furniture manufacturing business to a close sooner than they would have wished, but that characteristic earthy resilience meant he simply turned his skills to community action with the Lincoln Hills Development Corp, working to help the underprivileged through the non-profit’s Head Start program and other empowering initiatives.

Now retired, he was looking for something to do. “I guess I just wanted a challenge” he says. “I wanted the opportunity to repay the University for everything I feel it’s given me.”

We talk a little about what that is. A truly global family. A unique paradox of pride and humility, of the courage to lead and the strength to serve. A shared belief that along with the opportunity to be strong comes the responsibility to be strong, to face challenges and grow from them.

So we’re doing this thing, Bill Borders and me, and several others you will meet soon. And already I’m thankful to my University – yet again – for introducing me to people who feel like old friends I never knew I had until now.