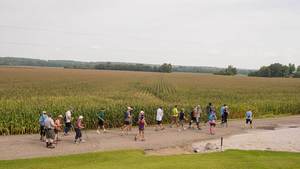 I believe I mentioned that the days on the Trail are all themed. So far, we’ve had Faith, Compassion, and Gratitude. Today is Stewardship, a topic which is important to me and which I’m going to totally ignore. If I had any Patience (that’s tomorrow) I’d save what I’m about to write for Saturday, which is Joy. But I’ve never been one for Patience and I’ve always been one for Joy, regardless of when it shows up.

So throwing the schedule out the window, let me tell you about walking with Brother Larry today, the 80-year-old who has twice bicycled across the country and is celebrating his 60th jubilee with the Congregation of the Holy Cross by walking this Trail.

First off, whataguy. Even better in person than on the phone. Such a gent.

So we’re walking and he asks me, pretty much out of the blue, “I ever tell you any of my Cajun jokes?” Now, One, I know Larry has what he calls his “adopted family” down in Louisiana, a Cajun family who teasingly invite him down to go gator hunting when they say they are short on “Yankee bait.” And, Two, I love telling jokes. So I’m all ears.

But before I dive in to the joke he tells me with relish, you need to enjoy the setting.

Today was a light day. Yesterday was a long day, as I think I mentioned. Everyone was wiped. To help everyone bounce back a bit, today’s schedule was adjusted so that we started on bikes and knocked off a chunk of mileage before walking the last bit to our stopping point for the night.

So at this point, we’ve ridden about 24 miles beside a rising sun. Motorcycle escorts through cornfields and across highways in the fog. A gloriously, humbling generous reception not long after sunrise at a church smaller than some living rooms you might have been in.

We parked our bikes and splashed cold water onto our faces and into our hats and set out on foot among the corn, talking as you do – or not, as you do – and drifting in and out of various conversations, picking up where you left off with one person as another stops to take a picture of a sign announcing a bean festival.

And Larry asks me if I’ve heard any of his Cajun jokes. And I haven’t.

And so the Clevelander slips into his best Louisiana Cajun accent, and begins...

So Mrs. Guidry takes herself to the doctor’s office on account of she can’t get any sleep. “Doctor,” she says, “I need some help. I’m gettin’ no sleep at all...”

“Well,” says the doctor, “Mrs Guidry, what seems to be the problem?”

“It’s the Old Tom,” she says. “That cat jus’ lets hisself into the room ev’ry night and he jus’ curls up and goes to sleep and snores loud enough so’s I can’t catch a wink.”

“Have you tried closing the door, Mrs Guidry?” the doc asks.

“I have,” she answers, “but doctor, don’t you know, he’s a clever enough cat he jus’ opens the door anyway. He even knows how to open the windows. I’m so desperate for a good night’s sleep, I jus’ don’t know what to do!”

So the next thing, Mrs. Guidry has herself in front of the vet explaining her plight.

And the vet listens, and he thinks, and finally he asks, “Mrs. Guidry, have you got a sewing basket?”

“And in that sewing basket, have you got any ribbon?”

“So the thing you do is this: when that Old Tom of yours comes into the room and nestles down to sleep and starts snoring so loud, I want you, as quiet as you can, to go get a long piece of ribbon, and then you lift up his back legs and you tie that ribbon around his hangy-down bits and that will stop his snoring. You’ll see. If it doesn’t work, you come back and let me know.”

And sure enough it works. The cat comes in, Mrs. Guidry ties up his hangy-down bits in blue ribbon, and the snoring stops.

However, not long after, Mister Guidry comes in from a night of drinking and flops down onto the bed, falls straight to sleep and sets to snoring so that the rafters are shaking.

“Well, it worked for Old Tom,” Mrs Guidry thinks to herself, and so she gets up quietly and goes back to the sewing basket and finds another piece of ribbon, this time red, and she tiptoes back to the bedroom and, just as with the cat, she takes the ribbon and ties up Mr Guidry’s hangy-down bits and, wouldn’t you know it, the snoring stops.

The night passes peacefully and the morning comes and it’s Mr Guidry who wakes first – feeling rather like the morning after the night before. So he makes his way to the bathroom for to relieve hisself and, standing there, he looks down at his hangy-down bits and he sees the red ribbon. Perplexed, he looks back out to the bedroom, and when he does he notices the Old Tom with the blue ribbon around his own hangy-downs.

Mr Guidry can’t make sense of it, however much he rubs his head. “Well, Tom,” he says finally, “I don’t know what we got up to last night, but we took first and second place!”

I’m giggling my head off every time Brother Larry says “hangy-down bits” and I laugh out loud and hard at the punchline, and so does he, and so do we.

I’ve long worried that the most underreported casualty of our technological age is the practice of telling a joke. We still share humor, but that’s just the problem: we share it. We click ‘like’ and ‘share’ and that’s the end of our involvement.

But telling a joke is so much more than making a person laugh. It’s drawing them in. It’s hooking them into an experience. It’s talking to them with the twinkle in your eye and stringing them along with the promise that the punchline will be worth it.

And it’s communal. When you share a meme online, you need to keep checking back to see if anyone got it. Sure, your retweeted tweet might make someone laugh, somewhere out there, but when you tell a joke you get to laugh together.

And I hear people make the excuse all the time, “But I can’t tell a joke.” And I wonder, When was the last time you tried? I mean, seriously. You couldn’t drive a car without practice, but that didn’t stop you.

Look, I’m a big fan of Stewardship – that aspect of looking after someone or something – and now, even though I said I was going to give the subject a miss in this post, I sort of see that it’s really what I’ve been talking about all along. Because we can’t look after one another from afar. We have to be close. Which means we have to be willing to be close. We have to be willing to share, and not just a meme with a click or a post. Stewardship requires sharing ourselves.

How better to start than with laughter?