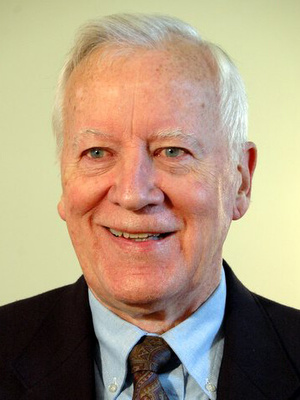 I’ve been hearing about Brother Larry Stewart, C.S.C., (’60/’61) from the very start of my involvement with the Notre Dame Trail. He’s the sort of man who leaves an impression.

In 1997, he celebrated his 40th jubilee as a Holy Cross brother by cycling across the country, sea to shining sea. In 2007, he celebrated his 50th jubilee by doing it again. This year, when considering how to mark the occasion of his 60th jubilee, he jumped at the chance to walk the 300-plus miles across Indiana in the footsteps of Notre Dame’s founder, Father Edward Sorin. Brother Larry is 80 years old.

“But I don’t look my age,” he is quick to reassure me. “People tell me that all the time.”

Why am I not surprised?

Turns out, in addition to biking the breadth of the US twice, he’s ridden the length of it – from the Gulf of Mexico to Canada – three times. He was even part of a team that rode the perimeter of the lower 48, though time constraints limited his participation to only about a quarter of the way around.

He grew up on the west side of Cleveland and joined the Holy Cross immediately after high school. Once at Notre Dame he earned his undergraduate degree in Pre-Med, then, a year later, he had his master’s in Virology. He taught in Ghana for ten years before returning to the US to earn his doctorate in Physiology from the University of Texas and another master’s, this time in Exercise Physiology, from Ball State. He’s taught at Ball State, St. Edward’s University, Holy Cross College, Saint Mary’s College, and the Tulane School of Tropical Medicine.

If only this guy showed some initiative.

He’s served as archivist for the C.S.C. for the last nine years and cheerily tells me that organizing things must run in his blood. His mother lived by the adage “A place for every thing, and every thing in its place,” while his father had a workbench with all the tools outlined in the place each belonged and there was no supper until every silhouette was populated.

Brother Larry is someone who is hard to keep up with, in conversation as much as in life. We cover a new topic in practically every sentence.

There’s a family in New Orleans who adopted him as their own long ago and regularly pester him to come down for a visit so the ‘gators can have some Yankee bait. Gator meat does, in fact, taste like chicken, but the only part where there’s really enough meat to eat is the tail. That’s where the white meat is. White meat, to a physiologist, is “fast-twitch muscle”. He, himself, is predominantly fast-twitch muscle, which he knows from an experiment he ran as part of his studies. Being predominantly fast-twitch means he should, in theory, be able to run a sub-three-hour marathon. His best time running a marathon is three-hours-six-minutes. (I barely complete a 10k in under an hour.) He’s long been actively involved with Wandering Wheels, a long-distance cycling organization, and tells me of a 72-year-old widow he was speaking with on one of their expeditions who had taken up cycling because, she told him “‘George wouldn’t have wanted me to be idle.’”

He’s allergic to shellfish, he remembers the time some clown in a class he was teaching at Holy Cross switched his prepared slides to pictures of a scantily clad Raquel Welch, and he has strong words regarding Father Sorin’s treatment of young Brother Anselm, who was left behind in Vincennes to teach while Sorin and the others all headed for South Bend to found a university.

My head spins trying to keep up, and I realize the best way to explain Brother Larry is to tell you he’s a nine year old boy who happens to have accomplished 80 years of living. He bounds. You know that verb?To bound? That’s what Larry does – whether in word or deed – he bounds, with utterly infectious energy, and I just love the guy.

Oh, and one more thing. For the record, I have seen the pictures and it’s true. He doesn’t look his age.