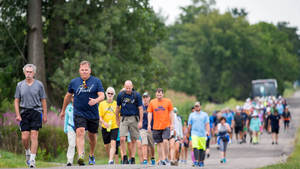 ​This isn’t over. We have not officially arrived at campus yet, even though we’re staying at the Morris Inn and went to Mass at the Basilica of the Sacred Heart and watched Rudy on the giant screen in the stadium and I have another couple dozen pictures of all the landmarks I already have a couple dozen pictures of, each. We have not yet walked onto campus. And that matters.

​We have walked from Vincennes to South Bend. We arrived at a green in the center of town earlier today. So, essentially, we made it.

​Crossing the Saint Joe River today felt like we made it. We took our last bit of rest on the other side, the downtown side, more to tighten up the package (as the state troopers refer to the moving crowd in their care) than to actually rest. We had only a mile and a half left in the day at that point. A mile and a half, as Lisa said to me, until whatever comes next.

​I don’t want to sound like I’m over-dramatizing the significance of what just happened. We didn’t perform any miracles. In it’s simplest terms, it was a very long walk.

​But I won’t pretend it was only a long walk. It was something much more than that. Much more than any of us who made that long walk ever expected. Which is why it matters that it isn’t over yet. Nearly done isn’t done.

​So, regardless of my comment yesterday, that the pilgrimage was finishing and that all that was left was the parade, these last three miles matter. And that means I cannot write a looking-back piece until I’ve finally arrived, until I’m no longer required to look forward.

​Perhaps that’s what I needed to learn today.

​It’s very easy to be distracted by the noise. This coming Monday’s life was working hard to encroach on Friday. There were more people on more cell phones today than I’ve seen the whole way, even accounting for our inflated numbers. I will even confess I was one of them. The issues of real life pressing in, refusing to wait, demanding my attention now that this thing is nearly over. Even as it’s not over yet.

​This is the way we live, now. But also a reminder that we might not want to live like that.

​The house we have finally left in Connecticut for this move is a house with so many unfinished projects. Home improvement projects begun with the best of intentions and seen through to nearly-done. And then, life.

​I’ve written a 550 page novel. The story has a beginning, middle, and an end. It’s taken me years to complete the writing part, but it’s still not finished. It needs to make it to print. A small, but, I think we can all agree, significant stage in its journey.

​Funny how the last stage, which should be so easy, so often gets overlooked. You’ve done the hard part. You bought all the materials and all the paint and built the window seat and tacked in all the trim, and now life is demanding your attention elsewhere and the damn thing never gets painted.

​We have walked from Vincennes to South Bend. But we haven’t walked to Notre Dame.

​Ever heard of going the extra mile? Every day on the Trail, there were these signs along the way telling us when we had one mile to go until a pit stop. Those were the longest miles. I think they were meant to be encouragement, but they totally had the opposite effect.

​And of course we completed each stage. We didn’t stop at the sign and reckon it was close enough. We walked the extra mile, which, of course, wasn’t extra at all. It was the mile necessary to complete the task at hand.

​Extra isn’t extra if it’s what needs to be done.

​We talk about going the extra mile in service or in friendship. Businesses advertise that they go the extra mile to take care of their customers. You describe your best friends as the ones who will always go that extra mile to do what needs to be done. But if it needs to be done, then that friend, out of all your friends, isn’t the one who did something extra, they’re the one who didn’t give up. They didn’t discount what was needed by saying it was good enough. They went the distance. And that, in my mind, is what really matters.

​In this Christian faith, I don’t know if Jesus was the Son of God (if that’s a hard line to read, I don’t mean to offend – please refer to my earlier post on the unprovable nature of faith). I don’t believe I can know that. But really, I often think it doesn’t matter. Or at least, I think that I have more to learn from the man who was fully human than I do from the sacrifice that was, as we are taught, fully God.

​I can relate to the human. I can learn from him. I can look at his struggles and see the reflections of my own. I can see the fears and all the reasons to call a thing good enough. And I can remind myself that he didn’t. Nearly done was not done. Good enough was not good enough. He taught us to lean in, to find strength in love, and to see a thing through it’s hardest part: completion.

​He taught us to go the distance.

​So this pilgrimage is nearly done, but it’s not done yet. And these last three miles will mean the pilgrimage is changing yet again – from our 32 to 130 to 300 to what we expect will be comfortably more than 3,000 – but it will still be the pilgrimage. It will feel more like parade (complete with marching band, I gather) but will, in fact, be something much bigger than all of that.