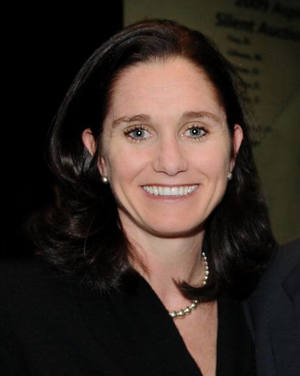 I had a really poignant intro planned.

In case you don’t know Haley Scott DeMaria (’95) by name, she’s the Rudy of my era. Haley is a pretty amazing woman and her reasons for walking the Trail are pretty amazing reasons and her story is in turns heartbreaking and uplifting and there are important people to honor and mention. So, yes, I’ll do the poignant bit in a second because, well, it’s poignant. We’ll absolutely get to all that.

But first, as she and I are talking on the phone and I pause the conversation to catch up on my notes, Haley interjects “Oh! I wanted to say: I don’t really swear, but I’m not offended by people who do, so I’ll hang with you and the two-name guy!” She finishes the pitch with enthusiasm, so that she’s practically asking to sit with the troublemakers, and I laugh out loud.

But back to the poignant intro I had planned...

Haley Scott was a freshman swimmer in January of ’92 when (this story may be ringing bells already) the team’s bus slid off the Indiana Toll Road on a patch of ice and overturned. Two of Haley’s teammates, Meghan Beeler and Colleen Hipp, were killed in the accident. Several of the swimmers were seriously injured.

With no feeling in her legs, she was told she would likely spend the rest of her life in a wheelchair.

Of course Haley’s story is much longer than a blog post, and there is no one to tell it better than Haley herself (you can read her comeback memoir, What Though The Odds - Haley Scott’s Journey of Faith and Triumph, which has been optioned for film and is only the third film in history with permission to be shot on campus), but the quick highlights are that, yes, Haley regained command of her legs. She learned to walk again. And swim. For Notre Dame. And in October of ’93, just a year and a half after being told she would likely never walk, Haley Scott swam – and won – her heat in a 50-yard race.

It’s the stuff of legends.

So you can imagine, of course, that walking – walking anywhere – holds special significance for Haley Scott DeMaria. And she, of course, recognizes the extra layers of meaning that are pertinent for her specifically in walking the Notre Dame Trail.

She says all these things. And I know she means them from her heart primarily because she doesn’t say them first. They are tucked away, under a layer of humor that is common in people with Haley’s kind of resilience.

No, the first thing she says when I ask her why she’s committed to walking 317 miles across Indiana in August is, “Are you kidding? For two weeks I won’t have to do any laundry or cooking.” The blissful anticipation is evident in her voice. “This is going to be a vacation!”

Then the comment about swearing and she volunteers to hang with me and Borders and the other Problem Children.

Then, finally, she admits that “walking...can be emotional for me.”

She wants to honor the University, Haley tells me, echoing a phrase I have heard – verbatim – from every single person with whom I’ve spoken about this walk. Now a member of the Board of Directors of the Monogram Club, she heard about the Trail when it was still just an idea being floated. She didn’t hesitate. “I’m in,” she said. “I have to do this.

“Notre Dame helped me rebuild my life,” she says. “I want to thank them.”

The DeMarias live in Annapolis now. Haley and Jamie (also ND ’95, but who, Haley is quick to point out, she did not date while at school) have been married seventeen years with two boys, ages 15 and 13. They were “the original online dating couple,” she says, explaining how they kept running into each other at the numerous post-ND weddings of mutual friends until, finally, they realized they had something pretty special of their own.

It’s a courtship and a marriage that is in its own way typical of Haley’s propensity for discovering she’s not where she thought she was, and rolling with it. A collegiate swimmer who was told she’d never walk. A paraplegic who became an award-winning swimmer. A student athlete who never realized her future husband and the father of her boys was that guy who was always there at her practices and meets as the swim team’s manager.

“Life may not take you down the path you plan,” she told the class of 2012. “But it can still be a really good path.”

And now, this walk. “I’m excited for the ways I don’t know to be excited for yet,” she says.

Indeed. I’ve known her fifteen minutes and I’m not at all surprised that this is her outlook.

What though the odds, Haley Scott DeMaria isn’t intimidated by life’s uncertainties. Like most of Notre Dame’s loyal sons and daughters, she embraces them.

And walks onward to victory.