A year before he died, Father Sorin wrote this marvelous tribute to his fellow Brothers who served with him from their departure together in France to their final resting place at Notre Dame. [Circular Letter No. 37, of Father Sorin, Nov. 26, 1892, in vol. 2, pg. 95.]

"To our dear Brothers: God alone knows the hardships they endured, yet without a word of complaint being uttered. God's holy will was their comfort and the unfailing source of consolation and joy."

The Early Years of Holy Cross in the United States

In 2002, the author, Rev. Marvin O'Connell, of the 720-page volume entitled "Edward Sorin" gave a lecture at Holy Cross College about the role of the six Brothers who accompanied Father Sorin in the first Colony of Holy Cross people to go to America and they eventually founded the University of Notre Dame.

For futher reading, additional stories about the Brothers are detailed in "Early Men of Holy Cross" written by Brother George Klawitter, C.S.C. This video, originally on VHS tape, is provided courtesy of Brother Lawrence Stewart, C.S.C. of the Brothers of Holy Cross, Archives Office and was digitized and preserved by the University of Notre Dame Archives.

These were the men that the founder of the Congregation, Father Basile Moreau, sent to the diocese of Vincennes, Indiana to fulfill the request of Bishop Celestin Hailandiere's desperate need of teaching brothers to staff his diocese's primary schools.

When Father Moreau drew up the rules or constitutions for the Congregation of Holy Cross, it was required that each community of brothers be headed by a priest. Rev. Edward Sorin, age 27, an ordained priest for two years was superior/chaplain of this group. His work of leadership, optimism, vision, and trust in providence and Our Lady have been thoroughly described in many books. 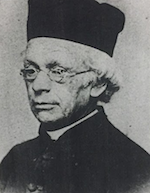 He was one of the first Brothers of St. Joseph who were founded by Father James Dujarie in 1820 to teach in parish schools in France. Father Dujarie later handed over the direction of his Brothers to Father Basile Moreau who combined them with the Auxiliary Priests to form the Congregation of Holy Cross. Brother Vincent was known as the 'Patriarch' of the group and was one of the three teachers (besides the young Brothers Anselm and Gatian) and was selected by Father Moreau to go to Indiana because of his maturity and experience.

Father Sorin spoke of Vincent as the "co-founder" of Holy Cross in America. His primary role was to direct the formation of candidates in a novitiate. He and Anselm were picked by Bishop Hailandiere to teach in the Cathedral elementary school in Vincennes. He was a member of the second group to travel to Notre Dame. Father Sorin relied on Vincent's experience and counsel in serving as his spiritual director. He died at the age of 93 on July 23, 1890 and is buried near Father Sorin in the Community Cemetery. [Further Reading: "Early Men of Holy Cross" by George Klawitter, CSC; pgs 103-133] 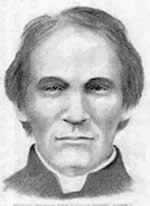 He was the second oldest of the group, twelve years younger than Vincent. Unfortunately not much is known about him. He took his final vows a few weeks before leaving Le Mans for America. His role was a tailor by trade and a cook by necessity when the Colony reached America. One of the first cabins built at St. Peter's was a "bake house" for preparing necessary meals. The woman housekeeper, who previously served the parish priest, stayed and taught Joachim "the secrets of preparing American cuisine." He was in the second group that traveled to Notre Dame in February 1843. Unfortunately, he suffered "consumption" (tuberculosis) for many weeks and was the first Holy Cross pioneer to die in America (June 9, 1844) and is buried in the Community Cemetery. 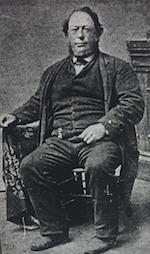 He was a very successful farmer in France and also in Indiana. A stout, burly, and imperturbable worker, he was well respected as a businessman and manager of the extensive fields at St. Joseph Farm of corn and wheat, herds of pigs and dairy cattle and orchards of peach and apple trees.

When he died. Father Sorin said of him: "I've seen many men of fidelity, great zeal, and devotedness, but I remember none I would place above Brother Lawrence. I lost a friend who never refused me any sacrifice." [Further Reading: "Early Men of Holy Cross" by George Klawitter, CSC; pages 134-150] 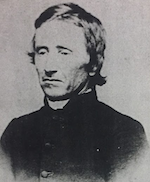 He was a talented carpenter and truly a jack-of-all-tradesman whose many skills and industrious zeal were put to use for more than 60 years. His work began almost immediately when the Colony reached St. Peter's and during the trek north to found Notre Dame. His talents came into play when wagons and coaches needed repairs.

At Notre Dame he worked in construction projects and also taught in the Manual Labor School. His major contribution to the people of South Bend was being named undertaker who created hundreds of coffins for burials, especially in the Cedar Grove Cemetery where he was its main caretaker. He was the last survivor of the original Brothers and died November 12, 1896. [Further Reading: "Early Men of Holy Cross" by George Klawitter, CSC; pages 151-167] 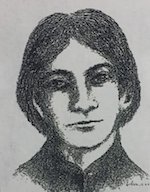 It is said that the most tragic misfortune endured by any of the Brothers was that of Brother Anselm. When he arrived at St. Peter's with the Colony, he was selected by the Bishop to teach (along with Brother Vincent) at the Cathedral elementary school in Vincennes and lived there in very uncomfortable conditions. He found himself "divorced" from the rest of the community, especially when they moved north to Notre Dame. Anselm wanted and needed the community life to which he had committed himself in Holy Cross.

He was assigned to teach in a school in Madison, in the southeast corner of Indiana on the Ohio River. He was very well loved at the school and also by the friendly pastor. One day the two of them went swimming in the River. Anselm unknowingly ventured into a deep portion and unfortunately drowned. The whole town attended the funeral of this beloved teacher and is buried there in Madison. [Further Reading: "Early Men of Holy Cross" hy George Klawitter, CSC; pages 168-185]. Learn more about Brother Anselm. 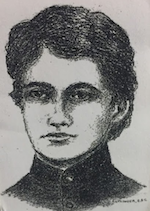 Probably the most fascinating was Brother Gatian, as well as the most naturally gifted. He quickly became fluent in English and was a brilliant classroom teacher and writer. He was intelligent but also indulged in intrigue, gossip, and criticisms of his superior's shortcomings. He did not hesitate to directly confront Father Sorin which his colleagues were afraid to do. When he was desperate for funds to keep Notre Dame afloat. Father Sorin decided to mount an expedition to go to California and search for gold. He put Brother Lawrence in charge and assigned Brother Gatian as secretary-treasurer. The embarrassing quest for any riches ended in bleak and bitter disappointment. Gatian wrote to Father Sorin saying he had been sick for four weeks and had run up a sizable debt of sixty dollars.

Brother Lawrence did make his way back to Indiana, but Gatian stayed in California and formally resigned from Holy Cross. He drifted to San Francisco and eventually returned to France where he died on his father's farm at age 34. [Further Reading: "Early Men of Holy Cross" by George Klawitter, CSC; pages 186-204] 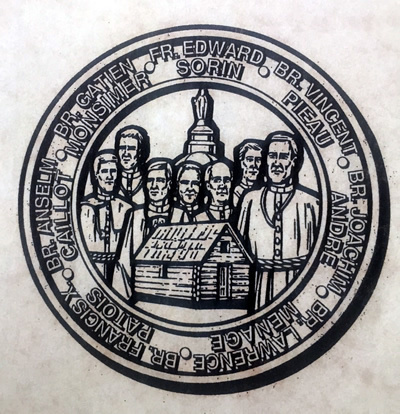 The goals that the Colony had in coming to Vincennes were: (1) to recruit candidates to be Holy Cross Brothers and build a Novitiate; (2) to build a “college” where they could teach and earn money. (NOTE: in French, the “college” is a boarding elementary or secondary school, not a 4-year college.)

The original Magnificent ‘6’ were professed Brothers. When they got to St. Peter’s (or Montgomery, near present day Washington, IN) there was already a candidate waiting to join up. In the nearly two years the group was there, a total of 13 young men joined hoping to become Brothers. Brother Vincent was supposed to be their “Novice Master” who would train postulants and novices in the spiritual life and Holy Cross rules. But, Bishop Hailandiere assigned Vincent (also Anselm and Gatian) to teach in the elementary school. So the 13 young men who were novices did not have the experience of true novitiate training.

When the decision was made to accept the Bishop’s offer and move north to found Notre Dame, they left in two groups. The first group left on November 16, 1842 and consisted of Father Sorin, two professed Brothers (Francis Xavier and Gatian), and five novice Brothers. Father Sorin became impatient when they were not moving fast enough, so he split their group in two. He, Francis Xavier, Gatian, and two novices (Patrick, Basil) went ahead and arrived at Notre Dame on November 27, 1842. The other three novices (William, Peter, Francis) brought the oxen and large wagon and reached Notre Dame on December 6, 1842.

In the spring, the remaining Holy Cross men left St. Peter’s on February 13, 1843, and included three professed Brothers (Vincent, Lawrence, Joachim) along with six novices (Joseph, Thomas, Paul, Ignatius, John, Celestine) and two postulants (Mary Joseph, Francis de Sales). They all arrived at Notre Dame on February 27, 1843. Brother Anselm was left behind to continue teaching in Vincennes as requested by the bishop.

Of the total of 13 novices who reached Notre Dame, only four persevered to be professed Holy Cross Brothers, and nine eventually left the community.