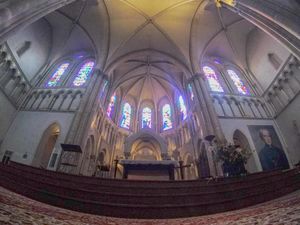 Last week I was fortunate enough to participate in the Holy Cross Heritage Pilgrimage in France with eighteen Notre Dame colleagues from the Division of Student Affairs. The three main requisites for making a pilgrimage are the belief that God responds to prayer, the conviction that grace is present in a special way at holy sites, and the desire to make a sacred journey. I was hopeful on all three fronts! I believed that God would respond to my personal prayers and that of those I was carrying with me to France; I believed that there was grace to be found in the places where Blessed Basil Moreau and Father Edward Sorin lived and prayed; and I was making a sacred journey to help create a sacred journey – the Notre Dame Trail.

I was asked a year ago to lead the execution of the Notre Dame Trail, the signature event of the University’s 175th anniversary celebration. The Trail has three main objectives: 1) to honor the Congregation of Holy Cross, 2) to educate about the 175-year history, and 3) to create a unique pilgrimage for Our Lady. We hope to create a journey of the soul through this pilgrimage, and I was confident that a better understanding of the Congregation’s beginnings would aid us with this challenge. I knew it was Father Basil Moreau who had founded the Congregation of Holy Cross and that it was he who sent Father Edward Sorin to establish a school in Indiana in 1841, but I wanted to know more about these great men of faith.

The Holy Cross Heritage Pilgrimage, led by the Rector of the Shrine of Blessed Basil Moreau, Father John De Riso, would provide such an opportunity. Basil Anthony Moreau was the 9th of 14 children brought into the world in 1799 by Louis and Louise Moreau. On the pilgrimage, we saw the wine cellar where he would have slept as a small boy. His childhood home was in the shadow of the local church in Laigne-en-Belin which was rebuilt and consecrated in 1867, a ceremony at which Moreau attended. This quaint town and original church are where Moreau would have first received the call of discipleship. He was ordained a priest in the Chapel of the Visitation within the diocese of Le Mans on August 12, 1821, at the age of 22, and served as a seminary professor of philosophy, dogma, and Sacred Scripture. We pilgrims said a prayer in the Chapel of the Visitation for all those who have dedicated their lives to God through the Congregation of Holy Cross.

Moreau had a strong devotion to Mary and sought to establish a community modeled after the Holy family – a community of three societies – including priests, brothers and sisters. When we visited the Shrine of Blessed Basil Moreau, this was quite evident. The Shrine includes a bas-relief of the Sacred Heart of Jesus and of the Holy Family of Nazareth, a statue of Our Lady of Sorrows and stained glass windows depicting the seven sorrows of Mary, a statue of St. Joseph, and a naïve dedicated to Saint André Bessette. During the celebration of the Eucharist at the Shrine, we had the opportunity to voice the names of the priests, brothers and sisters who have had an impact on our lives – Joe, Kevin, Joy, Austin, Larry, Veronique, Nate, John, etc.

Later, we visited the Solitude of the Savior, which was the first novitiate of the priests of Holy Cross. Here we saw the altar on which Moreau celebrated Mass as well as the tiny room in which he would have stayed. This tranquil spot is where he went to pray and reflect, and is said to be the place where he revised and edited the Constitutions of the Congregation of Holy Cross.  In his later years, Moreau was taken care of by the Marianites of Holy Cross here. A handful of retired Sisters still live at the Soltitude and were proud to give us a tour. Moreau was originally laid to rest in Holy Cross Cemetery in Le Mans in 1873; his remains were brought to the crypt of Notre Dame de Sainte Croix in 1938. Now known as the Shrine of Blessed Basil Moreau, his tomb was moved to the south transept of the church in 2007 in connection with his beatification. Although the Sisters of the Holy Cross, those who founded Saint Mary’s College, separated from the Marianites of Holy Cross in 1869, these were the sisters of their origin. I was proud of the dedication, trust and respect these sisters demonstrated towards Moreau, especially in his later years.

Blessed Basil Moreau, the founder of the Congregation of Holy Cross, was declared “Venerable” by Pope John Paul II in 2003, and was beatified in 2007 by order of Pope Benedict XVI. Those of us now affiliated with the priests, brothers and sisters of Holy Cross, are charged with demonstrating the same kind of zeal to help advance our shared mission. I secured three little stones from the Holy Cross Cemetery in Le Mans, one representing the sisters, brothers and priests. I intend to carry these stones in their honor along the 316 miles of the Notre Dame Trail this August, and will deposit them at the Log Chapel. We will give each pilgrim a stone to carry during their journey; these stones will symbolize each pilgrim’s individual prayer, wish or intention. I will be praying that the Notre Dame Trail touches the hearts and souls of thousands of pilgrims. Alleluia!