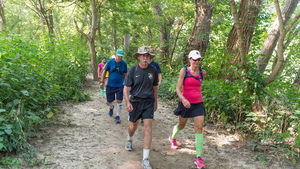 Today was an absolutely beautiful day.

For a start, today is the only day on the trail, apart from the very beginning and the very end, that we can be certain we are walking in Sorin’s footsteps. We know he came through Lafayette along the Wabash and so did we.

Of course, we are doing this in August with blue skies and a warm summer breeze. They did it in November and were fighting frostbite. I suppose I can crank the AC in the hotel room if I want to feel a little closer to Sorin and the brothers, but that seems a bit excessive, so today was – what? – as close as we’re going to get to what would have been his best day.

So, yes, 15 miles on foot over uneven, unpaved, muddy, tree-fallen, tick-ridden terrain and I am very eager to celebrate today’s theme of Joy. And here’s why: no bikes.

I love cycling, but after yesterday, I may be happy to never see my bike again.

Yesterday, we started out before dawn as we do and walked thirteen miles to a 10 a.m. lunch. Then we saddled up and set out to ride 28 miles, uphill (yes, it would seem there are hills in Indiana) into a headwind with gust of, I am told, up to 30 miles an hour.

Good thing yesterday’s theme was Humility. It was humbling.

It did do one thing, however, which was quite wonderful, I must admit. It made everything else not matter. The leisurely rides of previous days had involved friendly banter and conversation as we ticked off the miles. Not yesterday.

Yesterday was turn your eyes forward, lean down to get under the wind, and pedal. Read the road in front of you (one of our medics was charged by a dog while riding), judge the hills, choose your line, hush the voice telling you that getting your butt-cheeks waxed would have been a quicker way to accomplish the same effect, and ride.

I’ve heard people say “It’s not the destination, it’s the journey,” (coincidentally, there just came in a message from one of the other pilgrims as I write this to that same effect, so I must be picking up on a vibe here) but sometimes it’s hard to tell the difference. Sometimes, like yesterday on those bikes, the journey is an elastic band connected to the destination, so that you are oddly present in both while at the same time entirely unaware of how or where. I love those moments, though perhaps not while I’m in them, because of the way they make – they force – everything else to fall away. The journey becomes your singular purpose and destinations and other distractions are gone.

Anyway, we completed yesterday and rested and recovered. Even managed a little happy hour. And we noticed something. Apart from some acute injuries – rolled ankles, a sprained wrist, shin splints and blisters gone awry – there’s a lot less aching than there was at the start. As far as general condition and fatigue, the people are looking pretty good. It’s great to see.

I’ll say people even seem to be clearer of mind. Like when you go on vacation and it takes a week to stop thinking about work and the world and all the reasons you needed the vacation in the first place. The long pilgrimage takes time to settle into, but I can see people getting there. I can hear the conversations changing. No need anymore to superficially name jobs and memorize spouses and ask about numbers of kids. It’s not that those things don’t really matter, it’s that slowly you’re getting to learn a little more of why they matter.

In some ways that change is not so different from what I’m used to as an actor. As an actor, you’re regularly meeting a team of people you’ve never met and with whom you will be spending a short, but intense, period of time. That kind of trust and openness happens as a matter of course in the arts world, but less so elsewhere. It’s nice to recognize it happening here.

So today, walking 15 miles along the Wabash after having walked and ridden 41 miles yesterday, was a decent challenge. One which would have been a lot harder just six days ago, but one which today we managed with something like ease.

We finished the day with an added bonus – many of us got to see family and friends, if they were able to be in the area. My own wife has finally begun her drive – the final stage of our family’s move west – and so she and her father stopped in to Lafayette to have dinner with us last night and meet these amazing people doing this amazing thing. “They’re a really nice bunch of people,” she told me.

There’s a lot of love in this group.

So that’s where we are. I won’t speak for anyone else’s spirituality, but as we move we all are finding our own ways to listen to a voice, call it what you will, which can be hard to hear in the pace of the rest of the world. Physically we are undeniably getting stronger, mentally getting clearer. It’s taken five or six days of walking – after five or six months of training – for us to get here, but I feel like our hearts, minds, and bodies are finally about ready to reach for the good stuff.