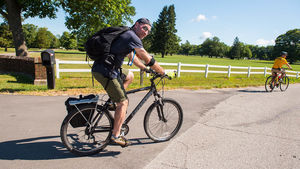 My brother thinks I’m an idiot. He’s never said as much to me, but I know it to be true.

He’s a terrific businessman. Very smart. Very successful. As such, he sort of sees the world like a spreadsheet. There are the numbers that go into different columns, some red, some black, and you work to make the black numbers bigger than the red ones. If there’s too much red in an area, you don’t go there. It’s obvious.

I’ll tell you up front, I’m terrible with money. I don’t value it, a character trait of mine which creates all sorts of problems. Even when I know what you’re supposed to do – spend less than you have, for example – I have a hard time determining how exactly to do that. I won’t get into the nitty-gritty of family finances, but it will suffice to say an artist’s income is rarely adequate to the needs of the day.

And my brother, quite rightly, looks at my life perplexed. I’m obviously smart enough – I went to Notre Dame. I’m evidently talented enough – I trained at the Royal Academy of Dramatic Art. The only conclusion he can make for why I struggle as I do is that I’m an idiot.

It’s a matter of perspective.

I have the same issues when I read bad writing or watch a performance that I don’t believe. I taught at a university in Connecticut for a while and would cringe as the first round of papers of any semester would come in. And the papers would go back appropriately graded and my students would ask to speak with me because they had never received such a mark on a paper before and I’d sit with them and look at the paper with them and I’d ask, “In this first sentence here, can you point to the verb?”

Facebook can be a physically painful experience for me...

I was talking with Mark Counselman (’98) last evening. Yesterday was a long day. You know that part of your leg, just above the ankle and just below your shin, which is essentially just skin and bone? Did you know there’s muscle there, too? I didn’t. I do now.

Counselman is sort of the quintessential good guy. He was a history major back in the day and now works in insurance. He’s specified for me twice already exactly what he does in insurance, but every time all I hear is “spreadsheets” and my brain grinds to a halt in understanding.

He’s the neighborhood tree guy, he tells me. He plants trees on various properties around his town to help with the upkeep of the neighborhood. This will be important to my point in a sec.

While walking today, we passed a house which was quite dilapidated. What Mark noticed was the youthfulness of the couple in the driveway, waving to us and cheering us on as we passed. He’s worked to help with a number of run-down homes and they’re usually owned by elderly or infirm couples incapable of taking care of the place, not obviously able-bodied twentysomethings who seemed to be allowing their abode to fall to ruin.

Others had made similar observations, noting the quality and cost of toys in the yard while the house was falling down around them.

But of course, none of us know why the house was in the condition it was in. The storyteller in me can offer up a host of reasons for its condition. The couple had only just bought the place and renovations were yet to begin. The family’s finances have taken a downturn and the toys are in lieu of any vacation the family has taken for years. The daughter is in gymnastics and the trampoline is an investment in her future if not their own. Or, sure, maybe they’re just bad with money. Or maybe they’re bad with money, and they know it, but money is to them what sentence structure is to all those people who tell me how they wish they could write.

And I share these thoughts without judging my colleagues at all, by the way. (Look, I’m frankly nervous about sharing this post. The last thing I want is for my colleagues to feel I’m admonishing or – yes, irony abounds – judging them in any way.) Empathy may be my job, but I only exercise it as part of my job. Otherwise, I’m as quick to criticize as is anyone. It’s a universal human trait.

Anyway, I offered these thoughts to Mark.

In return, he offered me a quick story. As was his mission, he had been planting trees in front of one particularly neglected house with knee-high grass and, let’s just say, zero curb-appeal. An hispanic woman was walking past, saw him in front of the run down property, and began berating him for having allowed the place to go to ruin. It took him no time at all to recall being on the wrong side of misunderstanding and uninformed judgement, a similarly universal experience, the yang to judgement’s yin.

Humility breaks the cycle. Humility is more than just the negative of not being proud. Humility is the curiosity that recognizes the very things we are best at may be the very things we’re worst at. That our expertise has the potential to be our blind spot. That our assumptions are only ever based what we know, and the tricky thing about what we don’t know is that we don’t know it.