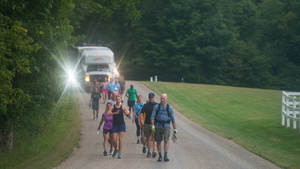 It can be a challenge to be introspective when you’re on something of a forced march.

That’s not a complaint, by the way. I have to say, and say emphatically and clearly, how impressed I am with the University for how they have managed to pull this off. Let me take a moment to explain.

We have 32 pilgrims walking and cycling from Vincennes, Indiana, through miles of corn fields, gravel roads, small towns, covered bridges, and highway intersections, to South Bend. It’s 317 miles and we’re on a schedule which, by the end, is down to the minute.

It has to be. This is meant to culminate with thousands of people joining us for the final few miles from downtown South Bend to campus. The scale at that end of the endeavor alone is huge and requires planning, and that means that everything leading up to it requires planning as well.

Plus, everyone here has something else to do, some other life on hold while this walk happens. This can’t just “take as long as it takes.”

We’re covering roughly 35 miles or so each day, under our own power. That takes time. There’s no way around it. Even walking fast, and I mean really leaning in to your stride, usually means you’re moving just under 4 miles an hour. Do the math and that means there’s about 5 hours of walking, give or take, which doesn’t account for any rest and is before you then have another hour or two on the bikes.

Nevermind the physical challenge. Look at the logistical one.

If you’re spending that many hours walking through one cornfield after another, you’re...well...you’re going to need to go. You’re also going to need to eat and drink. There are no highway rest stops in the middle of a dirt road through corn. Those need to be brought in, built up, broken down, and taken out. Repeatedly.

There needs to be medical support. It may sound silly to anyone who has never attempted to walk the distances that we’re walking day after consecutive day. But the simplest, tiniest little bubble of a blister can very quickly become debilitating. The risks go up from there.

There’s managing safety. The Notre Dame Trail is not a trail – it’s open road. We’re sharing the same space as cars, trucks, tractors, farm vehicles and even, today while cycling, eighteen-wheelers. And dogs. A lot of dogs. To make that happen, we’ve an escort from the Indiana State Police (which, frankly, has me spoiled to ever travel without a motorcade escort ever again).

And all of that’s just for the 32 of us who are walking the whole route. In a few days, we’ll be joined by about a hundred people who are walking the last five days with us and all that complexity grows. A couple days after that we’ll add a couple hundred more for the last three days. And then that last day, as I said, we’re talking thousands.

So, if you’re idea of the Notre Dame Trail is a pilgrimage across Indiana at a gentle meandering pace, walking in blissful solitude, contemplating the universe and your role in it, let me tell you: it ain’t that.

That’s not a bad thing.

We’re all part of something larger. We know that. We feel it. We want it.

This walk is currently proving it.

We walk fast, we rest quickly, we return to the path almost as soon as we can. Indy 500 pit crews would be proud.

It’s not just about the pace. It is, after all, a pilgrimage. We are meant – in some way – to be mindful of that.

Sometimes you can manage to get your own space. I walked alone much of the day today. Often just slightly in front of the crowd or, for a stretch, way behind it. In either case, walking purposefully with no one to talk to but my own thoughts.

Rain was forecast since last night, but we didn’t need the weather report to tell us so. We were in a dusk light from the moment of dawn, heavy clouds obscuring east or west and a steely grey hue over everything. At one stretch we were spread out on a road cutting through and slightly above corn fields to our left and soy to the right. With the bulk of our team about 20 yards ahead of me, I found myself thinking what a terrific lightning rod my six feet would make as I wandered alone above most everything else there was.

Rain was in the breeze, too, even when it wasn’t raining. That swirl of air that turns the whites of the leaves up in anticipation of the storm.

When the rain finally came, we were in the woods and I had still managed to keep myself to myself. Absent of conversation, I got to hear the rain approach through the trees, the quietly growing hush of water falling in a million drips from nothing onto something.

I love the rain. Which, I suppose, is a good thing since I live in Seattle.

I love the rain. I love weather in general and its disregard for our plans. I love the humbling nature of the elements. I love being put in my place by the currents I’ll never control.

These are the thoughts I think, walking through the rain on this Trail.

Patience was the theme today. Reconciliation was the message at the Mass last night. You can’t have the latter without the former, I found myself thinking today.

Reconciliation is not forgiveness, though they are often mistaken for being synonymous. Forgiveness is part of reconciliation, to be sure, but while being forgiven is being understood and respected, being reconciled is being rejoined.

That may take time.

And, it should be noted, it doesn’t guarantee a thing. But isn’t that the point of so much of what I’ve written this far? That nothing is guaranteed?

Patience gives a chance, though. It is active, not passive, and it perseveres. It is not the calm before the storm, it is the calm in the storm. It is the traveler unwavered by the tempest.

The moments to be alone on this pilgrimage are understandably and very forgivably rare.

But I was able to seize such a moment today and hold onto it for a while. Through the wind. And through the rain. Until the sun.