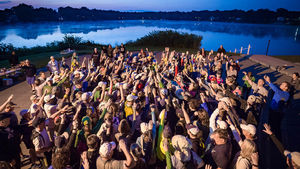 The celebrations have begun.

Yesterday we were joined by the three-day pilgrims, swelling our numbers (if the numbers I am given are correct) by as much as ten times our original core team. We were 32. We became 130. We have grown to something like 300.

What I’m reminded of is a lesson I learned in grade school science – that energy is constant, it simply takes different forms.

In this instance, the intensity of the first eight days is opened up and shared and becomes something more like community in this home stretch.

That’s a good thing, I hasten to add. As we walk now, in lieu of the quiet there are those with music speakers in their backpacks playing Journey’s “Don’t Stop Believin’” and everyone in earshot sings along. It’s pretty awesome. It means conversations abound in every direction, so that even if you yourself are quiet, you cannot help but hear the reasons for everyone who has come to be a part of this thing. Classmates and roommates reunite, the Murphy’s celebrate their 25th wedding anniversary, for Alan (or Allen?) and Connie it’s their 26th. Some celebrate their university. Some celebrate their kids’ university. Some, their parents’. Luke has beaten leukemia, and for him we rejoice. Others have not been so successful. There have been heart attacks and cancers and battles lost, and battles that rage on. One has beaten the cancer so far, but is waiting for the next shoe to drop. Another lost her husband, and with him the will to get out of bed in the morning. She needed something, anything, to be a part of, and found this.

They’re all here. This cacophony of purpose. These lives. All these lives. Every single one of them real and intricate – commonly beautiful and uniquely worthy of being told, if only I had the time.

Technically two. I shouldn’t discount the actual last day, but it will be so different from everything that’s come before it already feels like a different animal altogether. By the time we finish walking Friday, we will be in South Bend. Saturday will be an event, no doubt, but the distance will be largely ceremonial. Three miles from downtown to the heart of campus in the company of thousands. That’s going to feel more like a parade than a pilgrimage.

So. One day more.

(And if your head now has Les Miserables stuck in it, you’re welcome.)

Funny. At this moment, there is nothing more to say. It’s been two weeks of reflections and reporting, but right now – in the dark that blurs the line between yesterday and tomorrow – my head is quiet. The calm before the storm, perhaps.

I’ll proofread this soon and send it off to Bill Borders’ son, Patrick, to post. I’ll splash some water on my face and dress. I’ll slip on my shoes but only loosely so that I can get downstairs and have medical put some moleskin over the hotspots on my feet to make sure, after all these miles, I don’t stupidly blister up this last day.

I’ll get some coffee (finally, some good coffee) and breakfast. And I’ll hug Mark Alexander, the big mush that he is, and fist bump Pablo and Pat, and Tim Huddle will raise his arms above his head when he sees me and say “TD!”

And then I’ll return to my room and throw anything I might need in my pack and head downstairs and get on the coach to the park we left last night. I get to lead everyone in prayer this morning, and we even have a little surprise planned for our friends in Hawaii, and then we’ll line up, and we’ll set off, and we’ll do this – one more time – before we bring it home.