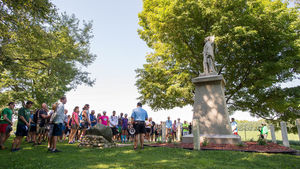 ​I’m struggling tonight. So many thoughts are pushing to make their way into words, they’ve crowded themselves at the door and no one can get in.

​My heart is heavy tonight. I’m challenged in a way different from any day on this Trail thus far.

​I’ve been struck all day by the question, "Why?"

​These ten days, this moment in time, has been nothing if not inspirational, but to what end is inspiration enough?

​Our pilgrimage paused briefly today to recognize and honor a pilgrimage of a different sort. There is a monument in Plymouth, Indiana, to Chief Menominee of the Potawatomi nation. It’s situated not far from the place where, in 1838, he and 858 of his people began what became known as the Trail of Death, a 660 mile march across four states as the Native Americans were driven by the army from their land.

​It would be hard not to feel the resonance, pausing the joyous celebration of our walk, to honor those who were walked to death on a journey twice as long as our own, not of their choosing.

​And so we said prayers.

​Some days before, when our pilgrimage was still just the core team traveling light, we passed a home flying three flags – an American flag, a Confederate flag, and a POW/MIA flag. Personally, I will confess: I struggle with the irony of flying  flags of the union and of disunion next to each other, but that struggle is academic. What was not academic, what was intensely personal, was that I was walking arm’s length behind a recent graduate of the University of Notre Dame who is far more intelligent than am I, whose generosity of spirit is evident to anyone who meets with him, whose very name is a celebration of the goodness at the heart of the Christian faith, and who is black; and I wondered which of those qualities would that home’s inhabitants recognize.

​And my heart was heavy.

​And we walked on.

​Later we had lunch.

​I wish I had more to say about that, but I don’t. And that’s the point.

​I wish there was a manual for how to be good, but there is not. And please, don’t tell me that the bible is such a manual when its words are so often twisted – or often enough not twisted at all – to justify hatred, bigotry, and war.

​No. I don’t believe such a manual exists. So, in its place, I look for heroes. People whose lives are their teaching. People whose character may be my lodestar.

​When I find them, I find they are guided by many things, but never are they guided by any need to be comfortable.

​They tend to be guided by curiosity, and distrustful of certainty.

​They tend to wear responsibility like a comfortable pair of jeans. They tend to leave things, places, people, better than they find them.

​They tend to act more than they talk.

​And they tend to love.

​They tend to love courageously.

​They are, as Father Sorin called us all to be, a powerful force for good. In a country which needed it then and needs it now.

​If this pilgrimage has been anything for me, it is the opportunity to surround myself with people such as these. And to challenge myself to be such a one in return.