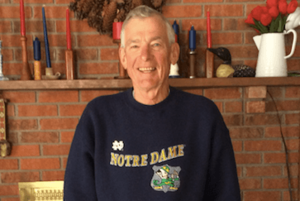 If it’s easy for me to feel proud of myself, walking and biking as much as I am in preparation for the 317 miles I and the other core pilgrims will cover in August, the bubble of my pride deflates quickly when I talk with someone like Pat Hellman (’63). We speak on a day he has completed a 27-mile bike ride as part of his training. The preparation seems to be going well – it reminds the 75-year-old of the last Iron Man race he was in.

A few, it turns out, is actually eight. In ten years. And he won his age bracket at three of them, and thus competing three times at the World Championships in Kona, Hawaii (where his best finish was a measly tenth place, the slacker). And he’s run the Boston Marathon nine times. Some other marathons, too. And some half Iron Mans.

Suddenly, walking to work every day feels like literally the least I can do...

When he received the initial email about the pilgrimage, he tells me, his first reaction was “Well, that sounds interesting,” and I cannot help but hear the echo of Bill Borders’ easy drawl. Pat has that same drawl, even if his voice has slightly less timber with age.

It’s been wonderful getting to know these people without actually meeting them – first impressions devoid of any physical features. I cannot see how good looking they are. They cannot see how bald I am. All we have to go on is the sound of our voices. Pat’s voice is shaped by a ceaseless grin, and he sounds like the sort of guy who’s been this spry old-timer all his life – the sort of guy for whom the word ornery was invented.

I aspire to ornerism. I’m going to have to take notes.

He’s been married 54 years (he and his wife just won the ‘longest married’ dance at a recent wedding). He met his bride on a senior trip to a University of Wisconsin football game back in the fall of ’62. He and friends were headed out for the evening and one of the friends needed a date. “I popped in to a sorority and there was a girl there and I asked her if she’d go on a date with my buddy,” he says. “And she said, ‘No. But I’ll go with you...’ (“She prob’ly doesn’t want me to tell you that,” he says, and I can still hear the grin and I tell him I’m going to include it anyway because I have a feeling that, after 54 years, he’s probably pretty used to being in the sort of trouble that isn’t really trouble at all.)

He came back for another game later in the season. By March they were engaged. In June they were married.

That’s how you do it, folks.

If we were so inclined, there are numerous connections to the University for us to discuss – kids, extended family, “we all bleed blue and gold,” he says – but I just enjoy talking about whatever seems to come up next. He asks me what if I’ve any good tips on what shoes to consider for the walk and suggests a recovery shake I might like and we agree that neither of us could imagine not bringing our own bikes. “She’s a bit overweight and she isn’t much to look at,” I say of my 2005 Cannondale, “but she knows my foibles and loves me anyway.” He laughs and says he feels the same.

We don’t discuss faith, per se, but as we talk about the idea of a pilgrimage I get the feeling Pat is something a little more like ‘devout’ than I am. For me, faith has always been important, but I’m often hesitant to admit that – not because I’m ashamed of it, but rather because I feel it’s a much bigger conversation than usually I have the time or anyone else has the patience for. But Pat’s happy to go there.

In just over a month, the Notre Dame Trail core group of pilgrims will set out from Vincennes, Indiana, to walk to South Bend. But for Pat and me (and I suspect a few others) it started sometime already. Sometime before now. Sometime before we realized it.

Sometime, somewhere along the miles, the training became a part of the journey itself, and all the walking came to feel like more than just walking to Notre Dame.

Somewhere back there we passed a point where it started to feel more like walking home.