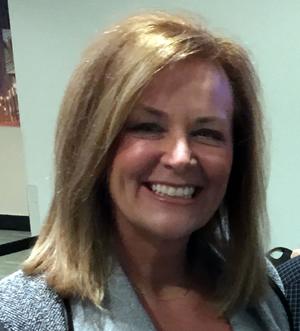 Laughter is just part of her voice. I can tell that immediately. We’re not even talking about anything yet. We’re just getting through the Hello’s and the Thanks for taking the time to speak with me’s and already I have cheeks aching from smiling so hard. That’s what it’s like speaking to her.

She confesses that she’s not been out walking like she probably should, and the trainer in me kicks into gear and admonishes her. She needs to take the walk seriously, I tell her. She needs to not be lulled into false confidence because it’s “just a walk”. The hours on feet thirteen days in a row – particularly in the Indiana summer heat and humidity – are going to be a challenge even for the pilgrims in the best condition. Going into this underprepared will be miserable, if not dangerous. Lace up, I tell her, and get your ass on the road.

She laughs and promises she will.

But it’s difficult getting into a routine, she says. Because there is so much to do.

And I know what she’s talking about. Even though her kids are all grown and flown, life is not generous with time. She has her work commitments and her volunteer commitments (neither of which are insubstantial) and her family commitments and the few minutes she would actually like to get to relax with her husband. And the walking is simply boring and time consuming and it feels a little selfish, and so it gets sidelined. It gets put last.

She is not selfish.

We’re talking about how she met and married her husband. Freshman Year, Day One – she at Saint Mary’s, he at Notre Dame – they met at an orientation mixer. They were friends from the start but didn’t actually date until their senior year. And so much was going on that senior year. She was an accounting major who enjoyed the number crunching in class but had just come to realize the actual profession was not for her. Plus their courtship. And that was also when she learned her younger brother, then a senior in high school, had terminal cancer. But she and her husband have been married thirty years now so they think it’s going to work, she jokes. And we both laugh.

And I back her up.

I back her up because she’s carrying on about how good life is. And it is. It plainly is. Their family has been very successful and they live in the public eye and everyone knows their life is good.

But what I pick up on is that, while life is good, it’s also life. Meaning, it’s also painful. It’s also ridiculously complicated and challenging. It’s also grossly unfair at times.

She had known her brother was very ill, but her parents had wanted her to focus on her degree and so had obfuscated the details. Returning home after graduation, however, the severity of his condition was obvious. She stayed with him so that her parents could work and for the next four months she was his round the clock caregiver. She did everything with him and for him, even taking him shopping to buy their parents his last gifts to them. He passed that October, a “jolt of reality.”

Then marriage and careers and kids and twenty years later, her sister-in-law called to share bad news about her other brother. Again, cancer. And the following year he passed.

Six months after that, her father died.

“So it’s just me, my mom, and my sister left,” she hesitates, “and it puts things in perspective,” she says, exhaling the emotions, and I hear her voice with its laughter, with its warmth and its heart and its indefatigable optimism. And I hear its tears. I hear them all in the same breath, because she knows that life is in fact very good, which does not preclude it also being very painful. And it doesn’t give a damn about fair. Life is, in her words, “original.”

“Everybody has their story,” she says. “I’m no different.” And with that, even as she laughs an apology in case she turned the conversation sorrowful, and even as I tell her she has no need to apologize and how touched I am to have been entrusted with her candor, she abdicates any inclination toward pity.

We talk some more.

If you don’t recognize them, if you don’t follow football, I should tell you that her husband played for the Irish, and then in the NFL, and is now a very well-known and well-liked sports commentator on ESPN. Both of their sons played for Notre Dame, the oldest then moving on to the NFL for a time. So you might be surprised to learn, with traditions running so deep, that they never tailgated as a family. There simply were always too many larger issues to be dealt with at the time.

And still, as she tells me this, I don’t hear regret. Just first-hand awareness that life doesn’t accommodate expectation.

Our conversation is winding down, but it seems to occur to her for the first time that this may be one of the reasons she’s doing this pilgrimage – the traditions her family was always so close to yet never got to be a part of as life placed other demands on their hearts and their time. Maybe this is another chance to claim one of those traditions for her own, on behalf of her family, for her brother, for her self.

“You have to push yourself to do the things you are alive to do,” she says. And for just a moment she’s not laughing. She’s quiet and thoughtful and completely serious, speaking from somewhere inside realization.

I think Chris Golic (Hansen, SMC ’85) is someone I’ll be sticking close to on this walk. I can tell why Mike grabbed hold of her friendship as soon as he met her and why he’s held onto her for thirty years. She has a rare heart, an indomitable spirit, and a clear sense of what matters in a crazy crazy world.

And when she laughs you can’t help but laugh, too.