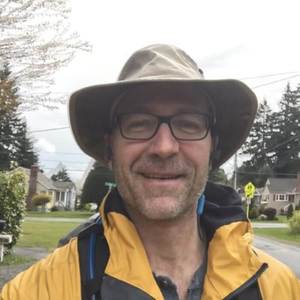 Beginning is the hardest part. That goes for just about everything. If there’s something I’ve learned, having crested what is (mathematically, at least) “middle age”, it is that I’m actually not as good at beginning as I would like to tell myself I am.

I’m ace on the accelerator. Give me a direction and I’ll get us there. When Opportunity knocks, I answer. I grab it by the lapels and give it a big, mushy kiss. I bring it in and pour it a drink. We’re best buds, Opportunity and me.

It’s just that I’ve recently noted how much more of my life is the result of Opportunity finding me than of me finding Opportunity.

I never dreamt of being an actor when I was a kid. But here I am, an actor – a real, live, professional actor – primarily due to the nature of most high school boys being too afraid of having their masculinity questioned by appearing on stage.

I was a freshman at Serra Catholic in McKeesport, Pennsylvania, when the spring production was going to be Oliver!, the musical. I couldn’t sing and so put myself down for stage crew.

The problem was, there were essentially no boys in the cast. Oliver had to be played by a girl, dressed as a boy. All the orphans were girls, dressed as boys. Looking back, I find it interesting no one in our Catholic high school gave a second thought to the cross-dressing issues here. Necessity merited a blind eye to irony.

My freshman speech teacher cornered me one day and asked if I would be interested in being in the show.

“You can lip-sync in the chorus,” she said. “I don’t care. I just need testicles on stage.” She actually said that. She was the cool English teacher in the school who said whatever she wanted.

So I joined the chorus. Then the boy playing the only non-singing role in the show had a conflict with track – and of course chose track. Thus, I was handed my first acting gig without ever having auditioned. A little over thirty-three years later, I’m an alum of London’s Royal Academy of Dramatic Art and have appeared on television, film, and stage in both the US and Europe.

But I never started out to be an actor. It just found me.

The story of how I came to be at Notre Dame is an even more elaborate series of accidents, much too long for a single blog post, but while there I performed in as many of the shows in Washington Hall as I could. My senior year, we staged The Crucible. I was John Proctor.

The assistant stage manager was this smoking hot PLS major in her junior year. I honestly don’t remember talking to her all that much during rehearsal as she was way out of my league, but there was one evening when, while closing up, she asked if I wanted to go grab some coffee at Fat Shirley’s. If you’ve never heard of it, this is a dive of a diner off campus which was actually called the G&H 24-Hour Coffee Shop. The locals, I later learned, suspected that G&H stood for “Gag & Heave”. The night cook was a remarkably large woman named Shirley who had little patience for drunk college kids stumbling into the place after they were thrown out of Senior Bar.

Anyway, the hot PLS major asked me for coffee and I’m not an idiot. I said yes.

Now it’s 2017 and by the time I and my fellow pilgrims set out on our 317-mile walk from Vincennes to the log chapel this August, JP and I will have been married twenty-four years and lived in five cities at eleven addresses on two continents separated by eight time zones. We’ve raised three girls born in two hospitals and one house, kept three dogs and one cat, and collected so many inside jokes along the way we rarely need to finish a full sentence. Most of our friends suspect us of either possessing a unique telepathy or just think we speak in tongues.

But I didn’t start it. I just recognized Life’s Blessing when she stood in front of me suggesting coffee.

And so here I am. I need to begin this blog series for the Notre Dame Trail. I need to tell you a little about myself, a bit about this walk which will follow (as closely as is safely possible) Fr Sorin’s path from southern Indiana to the founding of the University of Our Lady of the Lake, introduce a number of my fellow pilgrims, reflect a bit on faith, on the nature of a pilgrimage, update you all on any developments related to that walk, and possibly even launch a new tradition or two.

For now, let me just say that you should plan to check back here frequently. As a little taste of what’s to come...

I am one of the “Core Team” of pilgrims who will be walking all 317 miles from Vincennes to South Bend over two weeks at the end of August (that won’t be warm at all...) and also the team member tasked with documenting and blogging our experiences.

I’ll also encourage you to consider joining us on the walk for one of the shorter stages. Places still exist to take part in the 5-day or 3-day walks, and all are welcome to join us on the last day as we walk the last few miles from downtown South Bend onto campus. If you cannot be there physically, we are looking to give people the opportunity to take part virtually. More on that to follow.

Likewise, for those who want to be a part but are unable to commit to the time or training required for the full pilgrimage, we are offering to – literally – carry your intentions with us on the Trail in the form of small stones which will be left at the log chapel in a new tradition reminiscent of the Camino de Santiago. Again, more to come on that one.

Lastly, I feel it’s important to clarify that while much of what is contained in this blog will be official updates about what is happening on the Trail and/or on campus, I am in no way the “Voice of Notre Dame.” I will be writing as me, Tim, a ’92 graduate of the University of Notre Dame, former resident of Zahm Hall, a pilgrim, a thinker, husband and father, a traveler, an impatient philosopher, a passionate lover of life, and the most fortunate man I know.