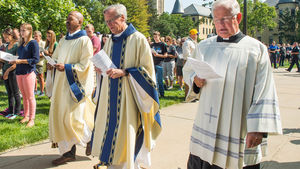 On November 26, 1842, Fr. Sorin and a few companions arrived in South Bend after an over-250 mile trek from Vincennes. He had good reason to rest after the long trip, but he insisted on making the three-mile walk to campus that very day. He arrived here, as you walkers arrived today, and was overwhelmed with the beauty of the campus that, unlike today, was covered in fresh snow.

Then the more difficult journey began. That was the journey involved in building a great University, dedicated to Our Lady, Mary, that would be a force for good in this new land. Sorin and companions would have to endure financial uncertainty, disease, occasional hostility from neighbors and fires to realize this dream.

As Sorin and his successors built Notre Dame, many joined to help. There were Sorin’s companions, the Holy Cross Brothers and their successors, who literally built the buildings, farmed at St. Joseph farm that fed the University community and taught in classes. The Holy Cross Sisters came in 1843 and opened a school in Bertrand, a few miles to the north, and in 1855 moved to the current site of St. Mary’s College. Members of the local South Bend community provided invaluable help, and the state legislature of Indiana approved a charter for the University in 1844, even though it was at the time a fledgling operation that lacked the ability to offer anything resembling a university education.