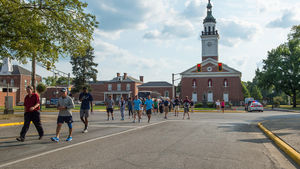 I’ll tell you right now I’m not going to tell you everything I want to tell you. No way. No can do.

Day one – hour one – and I’m seated between the guy who gave up his spot to dress for the ’75 Georgia Tech game to Dan “Rudy” Ruettiger on my right and a fresh faced 2017 Chinese and Pre-Health grad whose actual name is JesusisLord on my left.

The day ends with dinner and drinks along the shores of the Wabash at sunset and I find myself thinking, If this is pilgrimaging, why haven’t I allowed myself to suffer like this all along?

In between I walk and talk, and I listen and I think...

JesusisLord Nwadiuko (’17) is his real name, but it’s not the name he was given at birth. At birth, and for 14 years thereafter, he was Jeremy, short for Jeremiah. His parents are missionaries who came to the US from Nigeria almost 30 years ago. When they as a family would be called upon to tell their story – to bear witness – young Jeremy noticed how the gathered would sigh adoringly when his little sister, named Rejoice, would introduce herself.

He was eleven and he was jealous and he let it be known: he wanted a showstopper of a name, too. One day, his father sat him down. “I’ve been praying,” he said, “for a long time. And I believe we should change your name. To ‘JesusisLord.’ What do you think?”

He didn’t think much of it. In fact, what he remembers thinking was, “I don’t think you can do that. For a start,” he said, “it’s a sentence.”

When he realized his father was serious, then-Jeremy was horrified. He cried in fear until, as he remembers it, the crying stopped in an instant and was replaced by a single simple prayer. “Grant me the strength to carry this name.”

And before I go on and before you formulate any ideas about JL (as he is sometimes called for short) let me tell you he is one of the happiest, hippest, smartest young men you’ll meet. In the fall he begins working towards a masters degree in International Studies, International Economics, and China Studies from Johns Hopkins University in Nanjing, China. He’s soft spoken and big hearted with an athlete’s grace and an easy, open laugh that effortlessly brings you along.

It took three years and four tries to convince the courts to allow him and his parents to legally change his name, which he reckons was a good length of time to reflect on the responsibility of wearing such a mantel – “I better know who I’m repping,” he says.

Hearing him talk about his love for languages as a means of empathy, the joy in someone’s eyes when they realize you respect them enough to have learned their language, their words, their culture, I have to say I believe he reps the name well.

JesusisLord is the youngest of the pilgrims walking with us, an alum as of only a handful of seconds ago, or so it feels to the rest of us. Yet already he senses he’s part of something larger that he didn’t know existed before graduation. He’s aware that there’s family out there – he says this – and I laugh and tell him, “J...” This is his other nickname when even ‘JL’ is too long. “J,” I tell him, “you have no idea.”

Pat’s great-great-grandfather was a carpenter commissioned by none other than the University’s founder, Father Sorin himself, to help with the early construction of the campus. His grandfather not only built some 42 projects on campus (including the “God - Country - Notre Dame” doorway to the Basilica of the Sacred Heart) but was neighbor, friend, and ultimately godfather to legendary coach Knute Rockne. His mother’s cousin was a Holy Cross priest who served in Rome under two popes and who, in the days before the US entered the Second World War, was spiritual advisor to a young seminarian named Ted Hesburgh. His father was a Domer after the War. And, yes, in 1975 when Notre Dame faced Georgia Tech, it was Pat Sarb who gave up his position on the squad so that Rudy could finally play.

All of that, however, could be written off as happy accident. All of it could be dismissed as either before his time or part of the camaraderie of a football team. When I tell you that Pat knows what it means to be part of the Notre Dame family, I mean that when I ask him what inspired him to walk the Trail, he first mentions the legacy he is a part of, and then he pauses. And he swallows though, his throat I can tell is getting thicker, and we both wait until he feels he can speak. “My grandson...” he says and stops and that’s okay. I know the rest of the story.

His grandson has a rare genetic disease called nonketotic hyperglycinemia (NKH) which severely inhibits the metabolization of glycine, leading to very severe developmental issues and often taking the child’s life before they make it out of toddlerhood. In 2013, Pat approached the Boler-Parseghian Center for Rare and Neglected Diseases (CRND), founded by Ara Parseghian, Pat’s former coach, and asked for help. “Of course we’ll take the case,” he was told. “You’re one of ours.”

There is still no cure for the disease. But there are treatments, some being pioneered by a center founded by the man who gave Pat the opportunity to play for the Irish and attend the University on scholarship.

So he is walking the Trail, in tribute to the legacy he is and in support of the legacy that follows. It’s simply another piece of that extended family that is Notre Dame, another example of the way in which We are ND is so much more than a rally cry – it’s a testament to the responsibility every member of this family feels toward each other.

**To join Pat in supporting the CRND’s research efforts, go to <http://supporting.nd.edu/NKHResearchFund>. One-hundred percent of donations will go toward CRND’s NKH research.