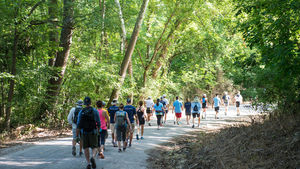 Whereas in the weeks leading up to this pilgrimage my assignments were laid out for me, contacts and introductions and interviews in a structured (if not formal) manner, today was just the road. It was conversations and eavesdropping. It was chatting. It was silence and solitude. It was time to reflect on not knowing what to think about. And it certainly didn’t feel like I had anything worth saying.

Let me tell you something about how to write a story, especially an episode of television. You want resonances. You want the episode to gradually move forward on the various characters’ storylines until, nearing the climax, you realize that they are all facing their own versions of the same struggle.

It’s a great dramatic mechanism. At the 47-minute mark of an hour-long drama, the little girl gets a puppy, just as the couple decides to try for a baby, just as the dreamy-eyed hero walks out of his shift in the emergency room and watches the sun rise, and you realize Oh! This is all about beginnings...

Life is rarely so convenient. Or, perhaps, we are simply usually locked in our own lives and don’t hear the echoes around us. The little girl with the puppy has no idea about the couple or the dreamy-eyed hero. She has no idea she is an echo. She is simply the hero of her own story.

I’m in a uniquely blessed position on this Trail. I get to listen. I’m expected to think – about myself as a pilgrim, yes, but also about, and for, and in relation to the lives happening around me.

At the end of a day which involved a 19.1 mile walk through more corn and soybeans than really any one person should face, after swimming and showering and sleeping to clear my head and refresh my body, I was struck by echoes. Echoes of stories not related, and yet not entirely un-related, either.

When my wife and I were married twenty-four years ago, we were given a honeymoon vacation to get away for a week to Cancun. It was terrific. Returning, we came through Miami on our way to Philadelphia. When we landed, we were stood in our row waiting to leave the plane when the woman behind us asked if we were newlyweds.

Evidently, we glowed, because this was a question we had heard several times in the previous week. We smiled and said that we were and the woman smiled and said “Look after each other.” Then, in the next breath, she explained in a single sentence that she was returning from Florida where she and her husband had gone to find a place following his retirement when, lying on the beach, he had suddenly and unexpectedly passed away. We were struck. My wife, better in just about every situation than am I, offered condolences while I was stunned silent. “So,” the woman said again, dry-eyed but plainly in the speechless dizziness of grief, “look after each other.”

I’ve been thinking about my wife a lot on this walk. If you’ve been following, you know that we’ve lived on separate coasts for a year as we go through the process of an extended move from Connecticut to Seattle. By the time the walk is over and I return home, she will finally be there – one week shy of a year since we parted.

It’s been a long year.

It’s been a long year for some other pilgrims, too.

Deb McGraw-Block (’77) met her husband, Rennie Block, in the fall of her first year in grad school. For 39 years, she tried to get him to visit Notre Dame. Somehow, he always managed to dodge the trip.

Last October he finally joined her. Micki Kidder, who is Executive Director of Development in addition to being another pilgrim on this Trail, remembers Rennie turning to her at one point in the weekend and saying, “Now I get it. It’s the people.”

Deb and Rennie returned home to San Diego and three days later, suddenly and unexpectedly, he collapsed at his gym and passed away.

“I needed something to do,” Deb tells me, of this walk. “Something to look forward to. Some time to be quiet. To figure out what’s supposed to be next.”

It echoes. It’s not the same, not by any means. But it resonates. It echoes.

Now, because it’s a Notre Dame sponsored event, there is of course Catholic Mass every day. No one is going to mistake me for the most devout Catholic in the bunch, but I do know when to stand and when to kneel and, usually, I even know what to say. And, being a Notre Dame Mass, the sermons tend to be a bit more thinky than your garden-variety parish Mass, and I’m totally down with that.

But before we get to the sermon this evening, before we’ve even really begun, the priest explains that today is the feast of Saint Maximillian Kolbe, a Polish Jesuit who, when he learned that a married man had been selected to be starved to death in Auschwitz, asked the guards to allow him to die in the married man’s place. His request was granted. Though his death took some two weeks to arrive, it was on this day 76 years ago that he finally succumbed, having martyred himself to preserve a family.

Another echo which I cannot define, but which feels significant. Even more so when I learn later in the evening that Kolbe is not only the patron saint of families, but of storytellers, too.

The echoes resonating want to coalesce into a story, but before they can, I learn of yet another pilgrim who lost the love of his life.

Terry Tulisiak (’74) is a doctor, a cardiologist at the Cleveland Clinic, built tall with the strength of a bull and the heart of a golden retriever. His wife, Marita (SMC ’74) died in 2014 after a long bout with breast cancer. He grieves. His life is full. He’s a wonderful, strong and independent man. But his full life and her full life once made their full life, and in that absence, he grieves, however much time may have passed, however strong he may be in himself.

I want to sum this up. I want to put a button on it like an episode of your favorite TV show where all the echoes resonate and finally make sense.

But we’re not watching a story. We’re living one. We are the characters in it. I want resolution, I want explanation, even as I know I won’t get it. The credits aren’t about to roll. Only the sunset before tomorrow’s dawn and we do it again.

It’s just – I don’t know – maybe it’s just that every now and then we hear the echoes, we feel the resonance, and we get a little glimpse of how many stories there are around us.

And it feels important to notice them so that we know we’re not alone.