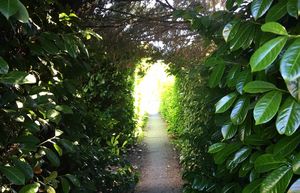 My wife and I describe ourselves as tumbleweeds. We celebrated our 23rd anniversary last year by her kissing me at Bradley International Airport in Connecticut as I boarded a plane for Seattle where I would spend the next week hoping to secure a new place for us to live out here.

We had no reason to be moving to Seattle. We had no connections in Seattle. We had no work in Seattle. When people ask us why we chose Seattle, I tell them “because we had never been to Seattle and thought ‘Why not?’” Life was some version of normal in Connecticut. Our youngest daughter was a junior in high school. We were both working. No one was looking for us to leave. Everything was, by all measures, normal, stable, and good.

And so we turned the table over and began the year-long process of moving across the country.

In September we packed the Volvo to the springs and our youngest daughter, our Bernese mountain dog and I headed north to I-90, turned left, and carried on until we ran out of road. My wife remained in Connecticut with the house and work; apart from a few years when I was in a television series in Liverpool, hers has always been the more stable and lucrative job.

We arrived the 10th of September, gainfully unemployed, to sign the lease on a house I had never seen. After emptying the car, the three of us – dad, daughter and dog – all went in search of some place to catch the tail end of one of Notre Dame’s rare wins last year. We were unsuccessful. Seattle has some different liquor laws from Connecticut and while the dog was welcome just about anywhere we wanted, nearly everywhere we wanted barred the daughter.

In the months since, I have found work, our youngest has settled very nicely into school, our oldest daughter has caught up with us out here, and my wife has been winding things down in Connecticut. She’s been alone back east for the better part of the year, apart from the handful of times our middle daughter drops in on her during a break from her studies in Boston. We’ve seen each other a grand total of about seventeen days since the first week of last September. It’s been a long year.

To top it off, I won’t even be here when she finally arrives in Seattle to stay. I’ll be on the Trail.

When we decided to move, most of our friends were thrilled for us and immediately asked what I suppose was an obvious thing to ask: “What will you be doing out there?”

“I don’t know,” I would say. And they would stare, waiting for the rest of the punchline. Because who does that? Who moves their family to the other side of the country with no plan?

But no punchline would come, and they would finally realize no punchline was coming, and their heads would slowly tilt sideways, kind of like when a dog hears a sound it’s never heard.

People got nervous for us. Most folks are allergic to that level of uncertainty, and I do understand why. It’s exhausting, at the very least. It’s a lot of things which I won’t bore you with, but you can probably imagine if you think about it because, as you surely know, Life is uncertain. There are always those things that come up. And they don’t wait for you to be settled. They don’t wait for you to be ready. They happen on their own schedule with no regard for yours. Adding uncertainty to Life’s already fickle nature seemed insane.

It’s been a busy year, in addition to the rest. I’ve finished writing my first novel and am in the throes of seeking an agent/editor/publisher. I’ve got work to tide me over and am in the early stages of looking to start a business out here. Separated by a continent, there’s a degree to which my wife and I feeling as though we are single-parenting the girls from opposite coasts. And just all that Other Stuff. Life.

I do part of my training for the Trail by walking to, and sometimes from, work. It’s a bare minimum of four-and-a-half miles each way, longer if I want to make it so (or if I try a short-cut which never is).

At 60th and Greenwood I happened upon a realization, a physical explanation of one of the significant reasons I am walking this pilgrimage. There is a hedge-tunnel along a strip of sidewalk where some homeowner has grown ten-foot hedges on either side of the pavement and which is over grown by trees and the hedges themselves. A short, fifty-foot section of my journey where, once I enter, my decisions are made for me for a time.

I’m used to uncertainty (I’m an artist, for God’s sake – uncertainty is what we do), but that’s not to say I don’t appreciate a little direction once in a while; some clear, articulate and unassailable, guidance; that ever elusive singularity of purpose; someone else, be it God or Life or a Seattle gardener, relieving me of the responsibility of choice, just for a time.

I know I’m no good at following the rules for the long-term. But for two weeks this August, however physically taxing walking all those miles in all that heat and all that humidity may end up being, at least I won’t have to worry about direction. At least for a little while, my next step will be clear.