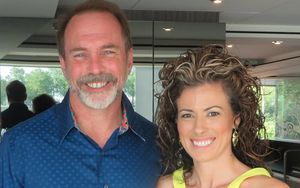 In his 2016 Laetare Address, Vice-President Biden explained how his “grandpop” had played for Santa Clara in the early part of the last century and how he always resented the team being referred to as “the Notre Dame of the west.” The Irish, the proud Bronco had insisted, were in fact “the Santa Clara of the midwest.”

Well. That being said...

Patrick J. O’Malley III, a proud ’84 graduate of the Santa Clara of the midwest, met his wife, Christine Ann Silva O’Malley, an ’01 alum of the Notre Dame of the west, at their workplace, Seagate Technology, where she is Chief of Staff to the President of Sales and Marketing and where he has served as CFO for the past eight years. And while they live in California, not far from Santa Clara’s campus, in just over a month’s time they both will be traveling to Indiana to walk with me and a handful of others in the footsteps of Father Sorin along the Notre Dame Trail.

Pat is “one of those nutcases,” he tells me, dedicated to all things Notre Dame. He explains how they have a unit just off campus – a small pied á terre you might say – where they head at least every home game weekend. And he gets back at least once a winter. And he’s there for every five year reunion. And a few other times in between.

Christine, for her part, married in to this insanity. I completely get why Pat is walking the Notre Dame Trail, but spouses typically just patiently suffer their significant-Domer’s fanaticism. This isn’t a matter of quietly tolerating Saturday morning traditions in the fall, or being willing to stand next to someone you love even when they’re dressed head-to-toe in blue-and-gold. This is personally opting to walk 317 miles of Indiana summer heat and humidity for a school that she didn’t attend and I’m curious if it’s not actually Christine that’s the nutcase.

“Three reasons,” she answers with so little hesitation I can tell she must have been asked the same question a few times already. “First, I really love Notre Dame. Every time we’re there I meet students and I’m always...” she searches... “so impressed. You really do build the best and the brightest at that school, and I love it.

“Second,” she says, moving right along, “I’m always up for a challenge. Physically, mentally, spiritually...” She stalls. “I don’t know,” she says, though (I hasten to clarify) it doesn’t sound like doubt. It sounds more like some anticipatory awe for the unknown. She’s committed to a thing which she knows is likely to affect her in profound ways, and she’s alright with that. In fact, she’s more than alright with that; it’s why she’s doing it.

“And third, last, I believe everything happens for a reason. Even if we don’t necessarily know what that reason is.” It’s a phrase we’ve all heard and most of us have used, but for some, it’s more than a profession of faith. For some, it’s a doorway – an acceptance fundamental to the journey.

Shortly after registering for the walk, Christine’s mother was diagnosed with cancer – news which came out of the blue. So I can certainly understand if the spiritual aspect of this pilgrimage has taken on some additional significance.

There is no denying the strength both Pat and Christine draw from the simple presence of the other, however quiet or unspoken it may be; a subtle, but unmistakable, reassurance in the surety of their partnership. Both mention how they look forward to walking the Trail with the other, yet each does so while speaking of something else. It’s not an afterthought, mind you; it’s simply indicative of the way each is part of the fabric of the other’s experience. It’s a beautiful thing.

They kindly ask about my own recent move to Seattle and I explain what I’ve only just shared in an earlier post here – how my wife and I see ourselves as tumbleweeds, how me move and become part of a new place for a time and live and work and share a life in that place until the wind blows and the road calls and we find ourselves in some next place for a time, and so on.

The idea appeals to them. Pat explains their own intentions to spend a little time moving in the years to come – taking about 3 or 4 years to live in about a dozen or so cities. “Get dirt under your fingernails” I say, quoting the advice I offer to students considering study abroad. “Don’t see the world through a tour bus window. Get off the bus and drink tea made with questionable water.” They laugh, and seem to agree.

You may be tired of hearing how I’m looking forward to walking with everyone I write about here, but it’s the simple truth. They all fascinate me in their ways. Good people with such diverse backgrounds and outlooks, far-reaching impacts, lofty successes, painful moments of heartache and trial, love, loss, friendship, laughter, and courage.

Pat and Christine O’Malley have quietly sauntered into their place in my imaginary line-up of characters for this thing about to happen to us all. In my mind, they are standing over there, quietly ready, open to whatever comes next. Pat is the one dressed head-to-toe in garish blue-and-gold. Christine is the one standing next to him, holding his hand anyway.