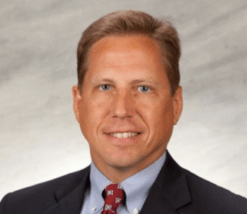 Stu Fortener (MBA, ’97) strikes me as the good guy in the group. The Clark Kent, saying things like “gosh” and “heck” and apologizing repeatedly – often in back-to-back sentences – for giving me answers to my questions which very sweetly he worries I’ll find boring. Nothing could be farther from the truth.

He speaks rapid fire in those sentences before those apologies – I’m hard pressed to think of anyone I’ve ever met who talks faster than Stu. Perhaps he’s trying to get through what he worries I won’t be interested in as quickly as possible. Perhaps that’s just how fast his mind works. Perhaps both.

I imagine Stu as the sort of guy who both grins and blushes at a dirty joke, who cooks a mean backyard burger with a cold, crisp beer, and who you could absolutely count on in your darkest hour. Those first two are pure conjecture, mind you, but I feel pretty certain about that last one.

With an undergraduate degree from Bowling Green and an MBA from Notre Dame, Stu went to work for Temple-Inland, “one of those huge companies no one has ever heard of,” he explains. He rose quickly through corporate, starting in marketing before being pushed into operations, then pushed into failing operations with the mission of turning them around – which he did repeatedly – until the day he stepped back and asked one of those simple questions that tend to change everything: “Is this really what I want to do?”

He began envisioning returning to Notre Dame and, sure enough, an opening presented itself. Now he serves the University as the Senior Director of Regional Development for the west region of the US and couldn’t be happier. “Here, it’s no longer about me,” he says. “Now it’s about ‘How can I help them?’”

Faith is a big part of his life, if you hadn’t guessed, but it’s plainly not a hypothetical kind of faith. It’s not a lip-service, show up on Sunday and genuflect when you’re supposed to kind of thing. Stu’s is a very hands-on, full-service, where-the-rubber-meets-the-road kind of faith. A pilgrimage-walking kind of faith, where the footsteps he intends to retrace are not Father Sorin’s but the anonymous brothers who walked in the shadow of the great man and quietly made everything possible with little or no recognition of their own. The quiet kind of faith that says, gently and with genuine empathy, “I think we’re all on a pilgrimage of some sort.”

And I agree. But it’s in my nature to be the devil’s advocate, and so I have a question. I ask if he’s ever considered that it might be something like cheating, choosing Notre Dame as the place to live one’s faith – that living a Catholic life at the University of Our Lady is perhaps significantly easier than living it in the outside world.

He pauses and considers before he answers.

First, he tells me, if I’m suggesting he ever consider moving on from Notre Dame, it’s not going to happen. “There’s no way my wife will let me move again,” he says with a grin I can hear. “I’m at ND for the rest of my career.”

But more than that is the role he sees for himself at the University. While he concedes that it is certainly easier to bring his faith to life on campus, it’s his job to take that faith out, to meet the people, to share both the University’s mission and his own heartfelt passion for it. It’s his job to be the evangelist, talking his faith at every opportunity, so that Notre Dame is more than faith’s retreat – it’s faith’s wellspring.

Now, in a little less than two months, he will be walking that faith. And he’s looking forward to the opportunity not to talk, for just a little while, and to think, reflect, pray, and listen.

And to keep putting one foot in front of the other, just as those anonymous brothers did, quietly serving something bigger than themselves.