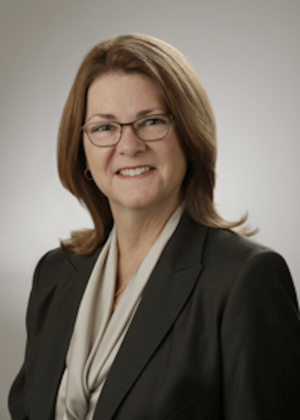 We spoke on the phone as she was out on a training walk for the Notre Dame Trail and it was immediately evident that my dark, evil streak had met its match in bright, cheerful goodness. It happened like this.

She tells me she was a vagabond over the course of her four years at ND, starting out in Lewis, then spending her sophomore year abroad in Angers, and returning to live in Walsh Hall her junior and senior years. Lewis Hall, if you don’t know, is the only dorm on campus situated behind the Admin Building – meaning, it’s the only residence hall Mary (on top of the Dome and facing forward) cannot see. And so I open with a joke I learned from one of my dearest friends on earth, herself a Lewis resident during our time there. “Oh, Lewis!” I say. “Do you know what LEWIS stands for?”

Honestly. My wife’s face is in her hands right now and this is why I shouldn’t be left alone at parties.

Anyway, Lisa laughs at the joke (thank God) and then – and I can hear her smiling as she says this – she tells me “You know it used to be a convent?” and I have to admit that I do know this and I sink a little deeper into my hole and I tell myself it might do me good to not always say the first thought that comes to mind.

But Lisa’s generosity saves the day (as, I suspect, it often does) and we move on to talk about her history and work and family and Notre Dame and why she’s committed to this walk. Though she doesn’t say it in so many words, I believe she’s one of the people for whom this experience is a pilgrimage in its genuine sense. “This journey began the moment I heard about it back in August,” she tells me.

She’s at a milestone in life – her youngest has just graduated college and her oldest is getting married – and she finds her vocation shifting from Wife & Mother to...whatever is coming next. And so timing of this pilgrimage – and all of the preparation leading up to it – seemed a perfect opportunity to reflect on what that might be, to open herself up to God’s plans for her.

“He equips the called,” she says. “He doesn’t call the equipped.”

It’s an expression of faith that pervades everything about her and which, in spite of that evil streak of mine, I greatly admire. It reminds me of my parents, who gracefully accepted whatever challenge was before them because That’s What You Do. Offer a prayer, roll up your sleeves, and say yes.

She is the creator, curator, and host of the blog catholicmom.com and author of The Grace of Yes, as well as four other titles all published by Ave Maria Press, and often finds herself an unofficial standard bearer for the University. “I meet a lot of people who misunderstand Notre Dame,” she says. “They know it for the football, or for presidential speeches (or more recently, vice-presidential speeches), and their own ideas cloud their understanding of the University’s mission. How we move the world forward is through communication and dialogue, and that goes both ways.

“I grew up Catholic, but only because I was born into a Catholic family,” she says. “Notre Dame is where I discovered my faith for myself, where I was introduced to a bigger world, and where I was taught to claim my responsibility in that world.”

Notre Dame, she says, forms us to be certain kinds of people. For sure, the University does not have exclusivity on integrity and there are countless courageous people in the world who’ve never set foot in South Bend, but still I know what she’s talking about. That lived belief in compassion over judgment, curiosity over certainty, that empathy is more powerful than fear, and that to love is the most courageous act of living there is.

Before I hang up and leave her to her training, she asks one favor. “Of course,” I tell her. “What is it?”

“Can you add a note to say thank you to my husband, Greg, for all of his support in this?”

Greg, if it is true that behind every good man is a great woman, then from all of us who have gotten to know your wife through her writing, her speaking, or even just appreciating her grace as she politely moves on from socially awkward jokes with strangers on the telephone, we offer a particularly heartfelt thank you. She’s got a long walk ahead of her and we appreciate you having had the good sense to step out of her way.