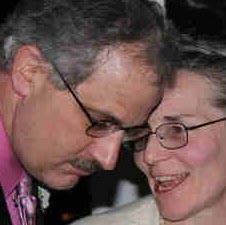 Speaking with the pilgrims on the Core Team, the thirty or so of us walking the entire length of the Notre Dame Trail from Vincennes to South Bend, I often feel as though I am about to enter freshman year all over again. There are these people I’ve never met with whom I am about to have an amazingly intense experience and the only thing we all know about each other is Notre Dame - that somehow we are all connected by and to that place and all that it means for all of us.

Some of them have lives which are 180 degrees from my own. Businessmen and women. Athletes. Bankers. Some feel as though they are other versions of myself.

And then there’s Jim (’81/’83) & Karen Jenista, who feel like two versions of myself. I started out at ND as an Aerospace Engineer with a Navy ROTC scholarship, but I had discovered a passion for acting and writing in high school and had a family friend who wanted me to follow that passion. She and her husband knew that ROTC was more out of financial need than a desire to serve in the Navy, and offered to be on standby to cover any costs my family couldn’t meet if I passed on the scholarship. Though my family managed without her assistance, I left Aero and ultimately graduated with a degree in English.

Karen started out as an English major, but was unable to complete her degree at the time as very early on she had met Jim, fell in love, married, and found herself pregnant with the couple’s first child...and not necessarily in that order.

For his part, Jim graduated in Aerospace Engineering on a Navy ROTC scholarship. Before committing fully to the Navy, however, his parents offered him the out. They made the same offer to him that our family friend did for me. He thanked them but continued on, finishing what I did not.

There are a few other parallels I’ve discovered since, and the whole thing feels a little surreal.

That said, however much of a connection may resonate between us, there is no doubt that either of them is the other’s other half. There’s the way in which they finish each other’s sentences, get distracted and draw each other back to the topic, talk about the dilemma of walking to cover distance or walking to read all the signs along the way, giggle and laugh at each other's jokes, and celebrate the sheer joy of spending your life with your best friend who is as unlike you as one can possibly be while still being exactly like you and your perfect companion.

They are yin and yang.

“Do you go on training walks together?” I ask as we talk via Skype, and their answer is for Jim to start giggling and Karen to roll her eyes in despair. In the week, she walks on her own, listening to music or audiobooks. On the weekends they walk together and “One of us talks,” she says, “while the other wonders ‘Do you have to talk the whole time...?’” They are sitting still on the sofa, but their personalities tell me all I need to know about their pace out on the road. She’s got a feisty energy that will be hard to keep up with. He just tries to “stay within shouting distance” so that he can tell her what all the road signs and historic markers said.

When I ask any question, either one begins to answer for both. Then, invariably, Jim digresses to a related thought which is equally fascinating and totally off-topic and Karen calls him back with a simple “Squirrel!” a la Dug-the-talking-dog from Pixar’s Up.

And they laugh. My God, they laugh. They giggle all the time. Each knows what either one is going to say because, without saying it, both have thought it separately together. They married in ’81 and their oldest child is (...both roll their eyes back into their heads trying to quickly do the math before one of them says...) “thirtyabunch.”

Also, Karen has no voice. Sort of.

I mention this late and out of the blue because it is practically not an issue. Her personality and energy are more than enough to make up for her dysphonia. I only mention it at all because of the turn in the conversation when I carefully ask if I can ask why she only whispers.

The answer is both simple and something of a mystery. She experienced laryngitis in January of last year, and her voice never returned. Doctors don’t know why. From time to time it will spontaneously reappear, though never for long. Unless she sings.

And so she does. She takes a breath and begins singing the next few minutes of our conversation (which is another one of those moments when I think how much I love my role of getting to know these pilgrims, these people, their lives – people I would have never met otherwise, people I would never have thought to learn about). But life is not a musical, of course, and singing to the checkout clerk at the supermarket might throw a few people on edge, not to mention how exhausting it would be sing literally every conversation. So she saves it for when she needs it and in the meantime people assume she has a bad cold and wish her well soon.

And she rolls on.

Both in their own way, past whatever other people might call troubles or difficulties or obstacles. Together as individuals, or separately as one. They shake it off, laugh, have each other, and keep going.