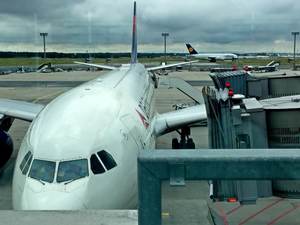 I’ve been back east for a week and a day. I spent last Saturday flying east so that I could spend the first half of last week shooting the exteriors of a short film on location in Sag Harbor, Long Island, and the second half shooting the interiors at a house in Hamden, Connecticut. I learned a few things this week.

For a start, I learned that three-and-a-half miles is roughly the point when the level indicator on my bladder switches from green to amber. We had one day when the shooting schedule had to be scrapped completely on account of rain, and so I laced up and headed out. At just three-and-a-half miles, I  was wondering how far to the nearest restroom. By six miles, I was considering knocking on a stranger’s door.

I’d like to blame it on the subconscious effects of the persistent rain, but I know it’s actually a sign of...well...not of getting older, exactly, just of no longer being younger. In all my summers as a child, I never remember thinking that I needed to leave some adventure, some bike ride or ballgame, for the bathroom. Ever.

So in lieu of any good brew, I drew the best cup I could find at one of those little faux French cafes you see in airports which look just like the real thing apart from the fact that they look nothing like the real thing. This one didn’t even have its own seating space. It didn’t even its own room. It was just an outcropping of pastries on shelves along with a battery of self-serve buckets of different flavored coffees. In addition to the cuppa, I picked up a sausage, egg, and cheese English muffin wrapped in liner foil – just the way they do it in gay Pairee.

And this is where I learned my next lesson of the week. As I was standing there in line waiting to pay, contemplating how to phrase tweet wittily observing that no one is happy to be at LaGuardia Airport at four o’clock in the morning, I witnessed one of those random acts of kindness we hear about but rarely have the wherewithal to perform ourselves. The line was held up as a young woman at the register was standing and waiting. None of us noticed what she was waiting for, we were all just there in our own worlds, all of us quietly wishing our own worlds involved still being in bed.

Then a young man, college aged, stepped up from behind me to the girl and solved a problem I’m not sure anyone else realized existed. It turned out she was having issues with her card. He produced cash for the attendant and bought the woman her breakfast and was about to move on with just a simple, sleepy smile. She thanked him sincerely, of course, and he only paused briefly to shrug it off. “Yeah. No problem,” he said. Then, as an afterthought, “Just, you know, pay it forward when you get a chance.”

Kindness. Simple and small, and worthwhile.

I had a terrific conversation in the car leaving the set in Long Island on my way to the Connecticut Ferry. My driver was a young man, just finished his junior year in college, maybe the same age as the fellow in the airport cafe. We talked about a number of things and as our drive was nearing the end he was looking for something to sum it all up. “If you could impart one lesson, if you could teach one thing, what would it be?”

Nevermind what I told him. I was honored that he asked.

No. I was thrilled, actually. Not because it gave me the chance to continue hearing my own wisdom, but because it came from a young soul who genuinely wanted to learn something from someone else, someone he didn’t know, someone as much a stranger to him as the young woman was to the young man in the coffee line this morning.

Both these boys (the older I get the more the world seems populated by children) are from that generation so frequently written off for their insularity, their unearned awards for participation, their inability to raise their eyes from their phones and their propensity to select unchallenging ideas that only reassure what little they already know. Yet here both were, responsible citizens, in turn stepping forward eager to be good and stepping back eager to be better. Aware, alert, and an active part of the world around them. More so, in truth, than the “grown ups” nearby.

It was wonderful this week to learn that it’s not a lost art.